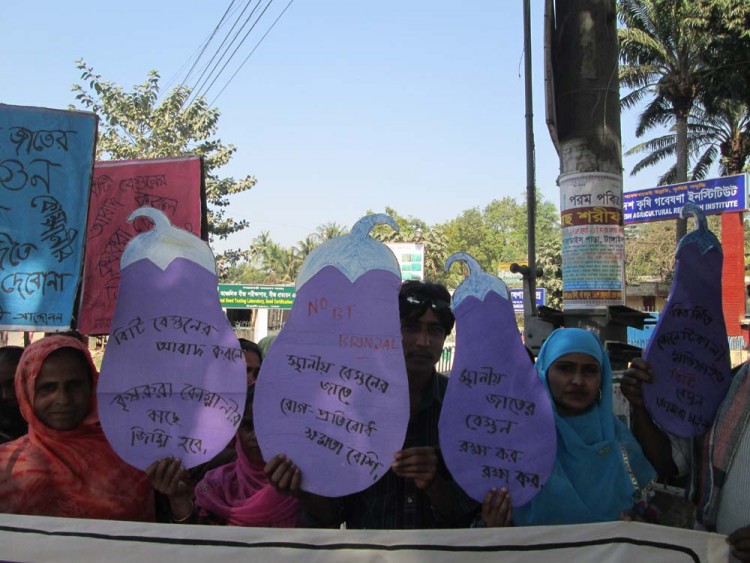 The Bangladesh Agricultural Research Institute (BARI) organised a formal distribution of seedlings of Bt Brinjal to selected farmers on 22nd January, 2014 following the approval for limited cultivation on 30 October 2013. Begum Matia Choudhury, Agriculture Minister has formally handed over the seedlings of Bt brinjal among 20 farmers at Bangladesh Agricultural Research Council (BARC), Dhaka. The selected farmers were from of four districts Gazipur, Jamalpur, Rangpur and Pabna. There were protests against such initiative and it seemed that the government cared less about any criticism against Bt Brinjal. In Dhaka, the Coalition against Bt Brinjal organised a protest rally in Dhaka on 23rd January, 2014 demanding that the agriculture ministry cancel its approval of cultivation of the genetically modified (GM) crop Bt Brinjal posing risks for health and environment. Coalition against Bt Brinjal protested the agriculture minister's role in encouraging farmers to cultivate the GM crop despite objections from various stakeholders even in the government. 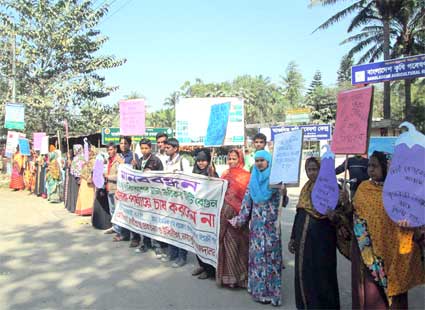 The protests are continuing in different areas particularly in the areas where farmers are selected for cultivation under the supervision of the Regional Agricultural Research Stations (RARS) of BARI. Farmers staged a Human chain urging to stop cultivation of Bt Brinjal in Ishwardi, Pabna and in Rangpur. In collaboration with Narigrantha Prabartana and UBINIG, farmers organized a Human chain at 11:00 am, 09 February, 2014 in front of the Bangladesh Agricultural Research Institute (BARI), Ishwardi, Pabna holding the banner “Bt brinjal which is harmful for human health and environment: Do not cultivate at farmers fields”. More than a hundred people including farmers, fishers, potters, students, teachers, women member of Union Council and member of other professionals participated in the human chain. A street meeting was also organized after the human chain. Among others, Hafizur Rahaman, a farmer of Atgharia upazila, Safura Begum, a farmer, Marjina Begum, a member of Union Council and Nur Muhammad, a farmer of Baraigram Upazila addressed the street meeting. Salim Sardar, Editor, Weekly Ishwardi and Arfan Ali, researcher, UBINIG spoke at the event about the adverse impact of Bt brinjal on human health and environment. The main slogan of the farmers emphasised on the rich diversity of indigenous brinjal in Bangladesh. They said, “It is our national responsibility to conserve the genetic variability. Bt brinjal was released in the interest of the multinational seed companies and not for wellbeing of the farmers. Extension of Bt brinjal will not only harm human health and environment but will also compel the farmer to be dependent on companies for seeds. 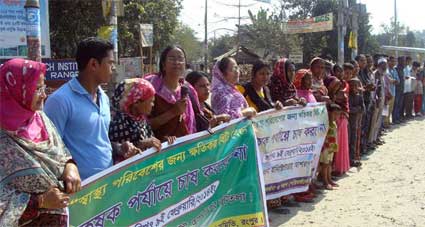 They said, reduction of the use of pesticide cannot be an excuse for introducing more harmful technology of the companies. There are many other methods of reducing pesticide use, why not adopt those methods? Farmers complained, “If we look back we see that the farmers were compelled to use pesticide under government patronization for helping the business interest of the companies. Now, they are talking about the harmful effects of pesticides and trying to release more dangerous technologies like genetically modified organism and risking our biological diversity. In disguise, our indigenous genetic resources are being handed over to the Multinational Seed Companies”.

Bangladesh Agricultural Research Institute is a national institute responsible for maintaining the local genetic resources of the countries. The traditional heritage of brinjal genetic resources developed by the farmers for thousands of years should be maintained by such institutions. Unfortunately they are dis-regarding farmers’ choice and our local varieties of brinjal are being handed over to the companies and at the same time the farmers are being compelled to grow Bt brinjal which will be a disaster for the farmers.

Farmers protested against the introduction of Bt brinjal in the interest of multinational company and at the cost of the people of Bangladesh.

In the human chain in Rangpur, held earlier on 8 February 2014 at 11:00 am, jointly organised by Narigrantha Prabartana , UBINIG and Mahigonj Chakbazar Mahila Kallyan Samittee protesting against the cultivation of Bt Brinjal. The Human chain was there for 2 hours standing in front of Regional Agricultural Center of Bangladesh Agriculture Research Institute (BARI). Local farmers, students, and leaders of different professional groups participated in the human chain. 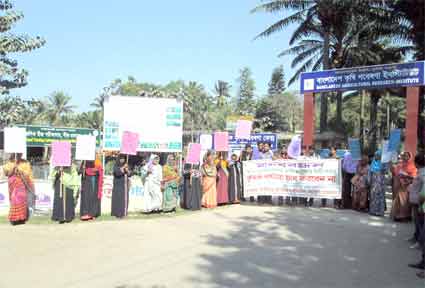