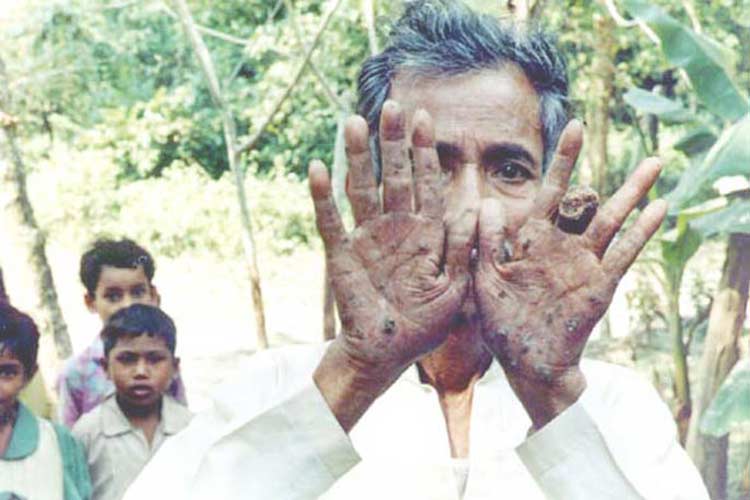 Arsenic is a poison. It is a significant health risk to millions of people worldwide when it is there in food and drink. It is highly poisonous at higher doses but chronic exposure to lower levels increases the risk of cancer of skin, bladder, lungs, kidney ,liver, colon , prostrate; cardiac disease, pulmonary disease, cardiovascular disease ,diabetes; diseases of arteries and capillaries ; increased sensitivity to Hepatitis B infection , infertility, and other ailments .Observable symptoms to the arsenic poisoning can be thickening and discoloration of skin, stomach pain ,nausea , vomiting , diarrhea , paralysis and blindness (Islam,M.S. and F.Islam .2007; iwawaterwiki.org ).

Arsenic occurs naturally in soil, water, air, plants and animals. There are two forms of arsenic: organic and inorganic. Both are easily absorbed, but the inorganic form is more harmful. It accumulates in body organ, is classified as a carcinogen and may affect different chemical and metabolic processes in the body.

Rice is an arsenic magnet:

Rice is very efficient in taking up arsenic, because it is grown in water-flooded situation. That reduces the binding of arsenic by soil. It makes arsenic more available to rice. The semi-aquatic nature of rice plant and grain gives the option to pull arsenic up from readily available sources. It is a fact that arsenic is a naturally occurring contaminant and because it is in soil and water, so it is going to get into food. Rice takes more arsenic from the soil than other crops. This is because of the way rice is grown. Rice is grown in flooded areas which charge the soil readily releasing arsenic from the soil.

Rice is most affected by arsenic uptake. The flooded soil is anaerobic and strongly reduced. In this situation arsenic is readily available to rice plants roots. Moreover, huge amount of water is used for irrigated rice than is used for aerobic culture. Different varieties of rice differ in arsenic tolerance. Seriously affected varieties develop straight head disease, empty panicle at maturity (Brammer, 2008).

Groundwater in 61 out of 64 districts in Bangladesh is charged with arsenic in different concentrations. Concentration of arsenic exceeding 1.00 mg per liter of water is observed in 17 districts including Chandpur, Comilla, Noakhali, Feni, Munshiganj, Brahmanbaria, Faridpur, Madaripur, Laksmipur, Gopalganj, Shariatpur, Narayenganj, Narail, Satkhira and Chapainawabganj.

Rice variety BRRI dhan 29 suffered from decreased yield from 8.9 ton/ha at 26.3 ppm soil arsenic to 3 ton /ha at 57.5 ppm arsenic .The results indicated that the practical limit for paddy production might lie between 25-50 mg/kg soil arsenic (Duxburry and Panaullah 2007) .

At higher dose (2.0 mg/l) of arsenic , the yield of BRRI dhan 28 and BRRI dhan 29 decreased 16 percent from control .The accumulation of arsenic was found to be higher in BRRI dhan 29 than in BRRIdhan 28(Huq and Joardar 2008) .

Arsenic measurement in shallow tube well water, soils and rice grains from boro (dry) and aman (wet) seasons from six upazilas of Bangladesh where arsenic levels in ground water were known to be low, revealed:

1. The arsenic concentration in tube wells was less than 50 microgram per liter.

2. The arsenic concentration in soil samples ranged between 0.2 - 4.0 mg per kg in the samples collected during the boro season.

3. The arsenic concentration in soil ranged between 0.4 - 5.7 mg per kg in the samples collected in the aman season.

Levels of arsenic in both boro and aman grain varied widely:

Household survey on dietary habits revealed, on an average the women consumed 3.1 liter of water, 1.1 kg of cooked rice and 42gm of dry weight of curry per day. The total ingestion of arsenic rates ranged from 31.1 - 129.3 microgram per day (mean 63.5 microgram per day). It was indicated that the major route of arsenic in Bangladesh is rice followed by curry and water (Islam et al. 2012).

The vast majority of food ingested arsenic in Bangladesh was found to be inorganic with the predominant portion in rice being arsenite or arsenate with dimethyl arsenic acid being a major component.

Linkage of rice arsenic with irrigation:

A highly significant increasing trend of arsenic accumulation in straw, grain and soil was found with increase of arsenic in irrigation water (Azad et al. 2013).

A total of 98 samples of rice collected from Sylhet region, which generally has a lower ground water arsenic concentration, revealed lower arsenic in aromatic rice. There was 40 percent less arsenic in aromatic rice than non-aromatic varieties that it also contained higher concentration of the essential elements like selenium and zinc (Low-Arsenic Rice Discovered in Bangladesh Could Have Major Health Benefits).

Higher arsenic levels in those who eat more rice:

People who eat more rice have higher levels of arsenic in their systems. Thus it was inferred that eating rice might expose some people to potentially harmful levels of arsenic. Women who consumed rice had higher levels of total arsenic in their urine, compared with those who did not consume rice. Each gram of rice consumed was associated with one percent increase in total urinary arsenic. Exposure to arsenic early in life as in the parental period, are probably more important because this is when humans are particularly vulnerable to disease development. The early life exposure of arsenic may be prime drivers of cancers (Higher Arsenic Levels Found in Those Who Eat More Rice).

Rice is the staple food of the people in Bangladesh. It provides about 48 percent of rural employment, two-third of total calorie supply and about one half of the total protein need of an average person. Rice contributes one half of the agricultural GDP and one sixth of the national income. All most all of the 13 million farm families of Bangladesh grow rice. It is grown in about 10.5 million hectares. About 75% of the total cropped area and over 40% of the total irrigated area is planted to rice (knowledge bank - brri.org/rice in ban.phb).

There is an urgent need of selecting crops that need less water for cultivation. It is known that maize needs about 850 liter of water for one kg grain production with 2 - 4 irrigations. Wheat needs 1000 liter per kg of grain production in 1-3 irrigations compared with over 3000 liter per kg of boro rice grown with 20-25 irrigations. Wheat and maize can be successfully grown as alternative crops to boro season rice.

With a view to shifting out of the vicious cycle of arsenic poisoning, we need to change our rice culture and food habit. We can only use surface water for irrigation and shift to residual moisture and rain-fed agriculture. We should grow more rain-fed aus rice and aman rice. The cropping pattern may be redesigned: in the Rabi season wheat/maize/potato/pulses/oil seeds/vegetables/spices/fruits/sweet potato - followed by rain-fed aus rice/ jute/summer vegetables/ sesame in Kharif-1, followed by rain-fed aman rice/summer vegetables/potato/soybean/black gram /groundnut.

We also need to diversity our diet, ease off dependence on rice and increase other items including fruits, vegetables, pulses, beans, fish, meat, milk, egg and other cereals like wheat, maize, barley and millets.

4 .Brammer, H. 2008. Threat of arsenic to agriculture in India, Bangladesh and Nepal. Environment portal. in/files/threat of Arsenic to Agriculture.pdf.