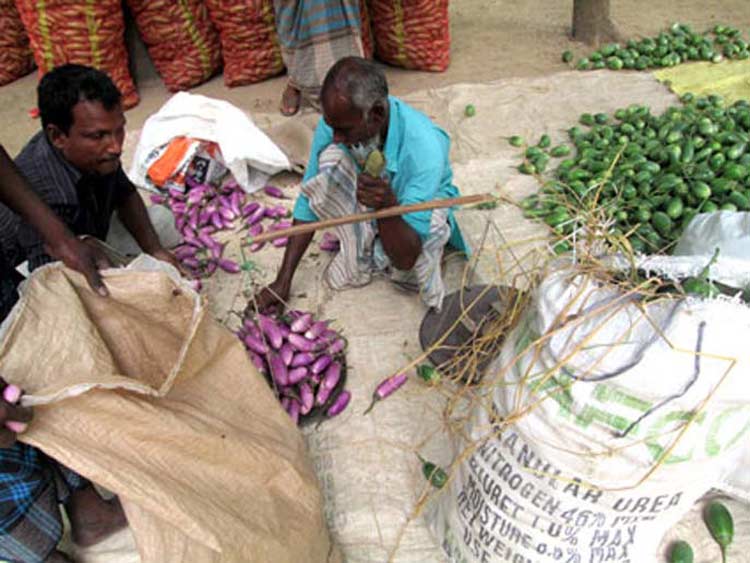 Bt. Begun Birodhi Morcha (Coalition against Bt Brinjal) expressed concerns over the open selling of Bt Brinjals cultivated in few districts of the country. According to the approval given for limited cultivation of Bt Brinjal at the farmers’ field it was mandatory to label Bt Brinjal at the time of selling. This in line with the international policies and demands of the consumer groups to label Genetically Modified crop for awareness of the consumers. Through labeling the consumers can make a choice whether they want to buy the GM food or not. Unfortunately, Bt. Brinjal growing farmers are not given that direction and the authorities in Bangladesh are simply bypassing their responsibilities.

The Coalition against Bt Brinjal, in Bengali known as Bt Begun Birodhi Morcha, held a human chain in front of the National Press Club on 17th July, 2014 after receiving information from Rangpur that one farmer, who received Bt. Brinjal saplings from BARI in Rangpur sold 85kg and another farmer sold 80kg at Taka 800-900 per maund (one maund = 37.32 kg), according to the latest information (12 July, 2014) in the month of Ramadan at Khalashpir market, Rangpur. Another farmer sold 200kg Bt Brinjal at taka 800 per maund. During this month, Muslim communities are performing fasting (in the month of Ramadan according to Hijri calender) and there is a cultural practice of consuming brinjal, oil fried with Beson called 'Beguni' as a popular Iftar item at the time of breaking of fasting. There is no way to trace the buyers of Bt. Brinjal in Rangpur to know whether they would have any adverse effect. The Morcha raised the question if there any mechanism to collect information of those consuming Bt. Brinjal if there is any health impact? Who will take the responsibility? 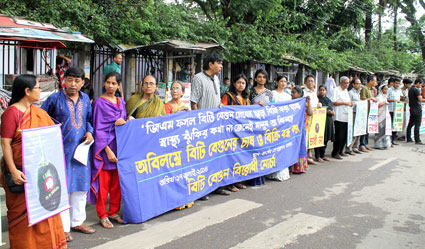 It is indeed a violation of the terms No. 6 of Approval given on 30th October, 2013 by the National committee on Biosafety (NCB) that Bt Brinjal should be labeled before marketing. It says, the applicant authority must ensure labeling of Bt Brinjal before marketing according to the Biosafety Rules. There is no sign of any official from the Ministry of Environment & Forest to oversee the marketing practices.

Earlier in the month of May-June, Morcha groups observed that the farmers cultivating Bt. Brinjal did not have good experience in the cultivation and selling of Bt. Brinjal. Most of the farmers have failed crops in the field. A farmer in Rangpur, who could harvest Bt. Brinjal had taken five sacks (each of 45 kg) of Bt Brinjal to market. The first sack that was opened looked bright and was sold for Taka 500. Within two hours the Bt Brinjal in other sacks were squeezed and looked pale. The buyers lost interest due to the poor appearance. The farmer was compelled to sell the remaining Bt Brinjal at Taka 300 for each sack. The other famers had sold Bt Brinjal Uttara at Taka 480 for each such sack. On the other hand the local variety of brinjal, Khatkhatia was being sold at Taka 600 per sack. They opined – “Bt Brinjal squeeze on touch and the buyers do not like”. 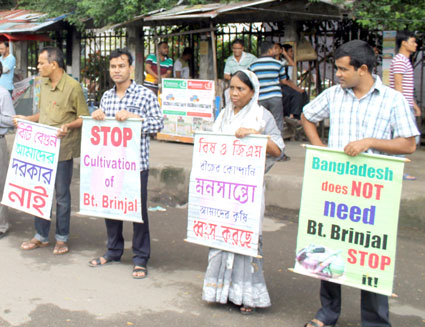 The resistance against Bt. Brinjal has been going on before its approval for assuring safety of the GM crop before it is given for open cultivation. Inspite of that the research on Bt Brinjal has been continued concealing its results and its cultivation at farmers level has been initiated at farmers level since February 2014 by the Bangladesh Agricultural Research Institute (BARI) under the special program of ABSP II of the USAID through the Multinational company, Monsanto and Indian seed company MAHYCO. The brinjal has been Genetically Modified (GM) with the insertion of crystal gene from Bacillus thuringiensis (Bt).

Not only on leaves but also on stem and fruits there were insect infestations although the Bt Brinjal was supposed to be 100% insect resistant against FSB. In many plants flowers were rotten and firsts were damaged. The claim of Bt Brinjal to be free from pesticide was not also proved. According to the advice of the Agriculture officer and the own initiative of the farmer, the farmer had applied malathion against insect, cumplex against fungi and omite against mite. The most alarming situation is that Bt Brinjal was being sold in open market in Rangpur without labeling. The identity and address of Bt Brinjal buyers were not recorded for facilitating follow up and treatment in case of any health related problem due to consumption of Bt brinjal. 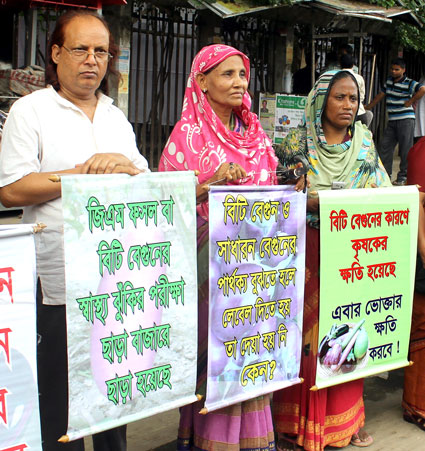 The Morcha also observed that the farmers have mentioned that they did not keep any Bt Brinjal for their own consumption. The Agricultural officers in the research area refused to take Bt. Brinjal from the farmers even as a gift. Bt Begun Birodhi Morcha urged upon the Government to immediately stop the cultivation and marketing of Bt Brinjal. Morcha believes that with faulty research and failed cultivation results, the marketing without labeling will pose serious problems that the government will be responsible for.

The Human chain was attended by various groups including Farida Akhter, Mohidul Haque Khan, Dr. M. A. Sobhan, Rahmuna Nurain, Jahangir Alam Jony, Shima Das Shimu, Rokeya Begum, Palash Baral and other members of the Morcha. The general public passing through the street stopped and wanted to know about the Bt. Brinjal and its potential hazards. The members of Law enforcing agencies were curious and kind of appreciated the purpose of the Human chain. 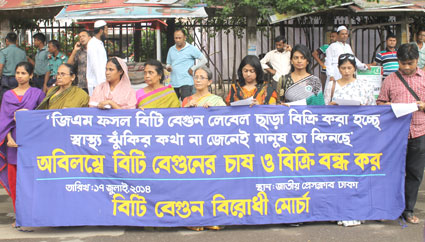 This write up was shared among the members of Bt Begun Birodhi Morcha, civil administration, members of print and electronic media and the general public in the human chain held at 10:30 am, 17 July 2014, in front of the National Press club, Dhaka.