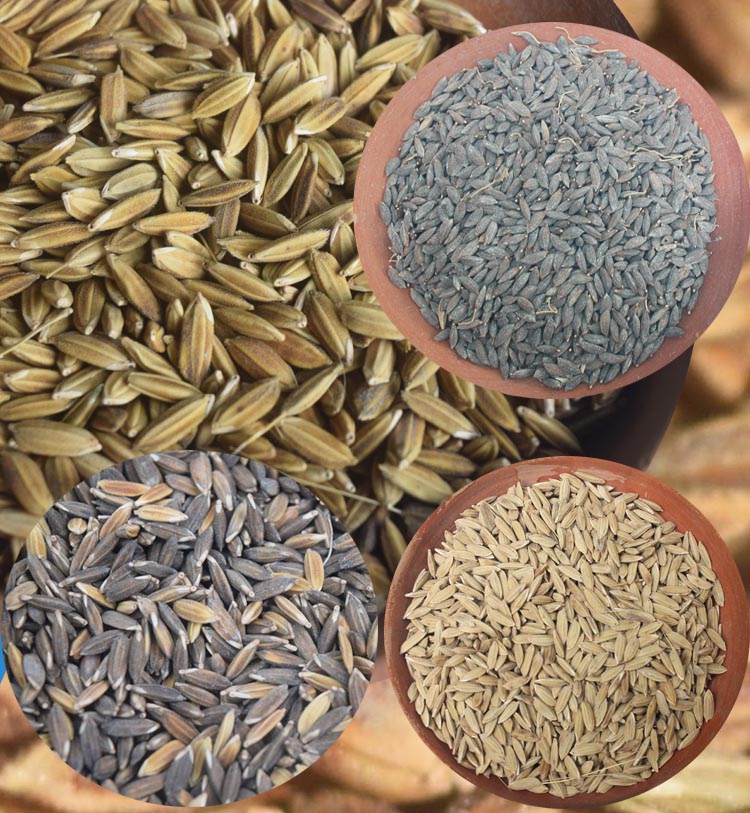 Preserving the diverse varieties of rice is not just an act of conservation; it is for the happiness of the farming families on different cultural and religious occasions. On August 12, Eid-ul-Azha, the second largest religious festival of Muslims, was celebrated across the country following the 10th day of moon of Arabic month of Zilhaj. This festival is marked with slaughtering of sacrificial animals including cows, buffaloes, goats and sheep and few other animals. According to the Department of Livestock Services (DLS) 4.58 million cows and buffaloes, 7.20 million goats and sheep, and a large number of other sacrificial animals were available to be slaughtered this year (2019) .

While in Eidul Fitr, people are busy buying new clothes, before Eid ul Azha people are busy in buying cows or goats and sheeps according to their respective financial capacity. It is known as Eid Qurban (Qurbani Eid, in bangla); some call it bakri-Eid (Eidul bakara – the feast of cows, goats and sheep). It is also called the Greater Eid and marks the end of Hajj – the annual pilgrimage in Mecca. Sacrificing animals on Eid al-Adha is a confirmed sunna (sunna mu’akkada) and not an obligation. The sacrifice is not a pillar in Islam; it is a prophetic practice of purification and sign of trust in God. The Muslims honor the willingness of Prophet Ibrahim (a) to sacrifice his son as an act of obedience to Allah’s command. But, before Prophet Ibrahim [Abraham] could sacrifice his son, God provided a lamb to sacrifice instead.

Everyone in the village does not sacrifice animals, but it is very likely that each family (including the non-muslims) will receive a share of sacrificial animal meat. The sacrificial animal (a cow, goat or sheep) is sacrificed ritually in a religious way after offering the communal prayer, called Eid Jamaat. Then the animal is slaughtered and then the total meat is divided into three parts. One share is given to the poor and needy, another is kept for home, and the third is given to relatives and neighbors.

Preparations are made for food items that come with meat. Its significance lies in sharing of raw as well as cooked meat and passing on culinary knowhow from one generation to the next. Not only meat, special items are made such as pulao (rice cooked with butter-oil, flavours of hot spices), khichuri (rice with pulses, turmeric, and spices) payesh (sweet dish of rice and milk), firni (sweet dish of rice and milk), rice-flour bread (chaler-ruti) etc. a mix of spicy food and sweet dishes. Here we shall present the food dishes from two rural areas as well as in Dhaka in terms of diversity of rice used.

With meat (beef and mutton) chaler-ruti is the main item that goes well. Pulao and khichuri are also made according to the choices of family members. However, each of the rice-based items has use of different rice varieties.

The common dishes prepared in all the 4 areas, including Dhaka city were, Payesh, pulao, ruti and kichuri who go well with different meat preparations coming from the sacrificial animals such as cows and goats.

Payesh and firni are sweet dishes prepared with white and fine quality rice with milk, sugar/molasses, coconut, nuts and other dry spices for flavours. The rice varieties used are Begun bichi, Kalijira, Bashmoti, Najirshail, Jamai aduri, Chiniguri, Paijam and Kartik jhul. At least eight different varieties of Aromatic and non-aromatic white rice are used that are grown by farmers themselves. In Pabna and Natore areas 5 varieties while in Tangail 6 varieties were found. Three varieties Kalijira, Chiniguri and Bashmoti were found to be common in all the areas. Even in Dhaka city use of Chiniguri and Kalijira was found. However, since Dhaka market has supply of rice from all over the country, Radhuni pagol was used as well which comes from Dinajpur. 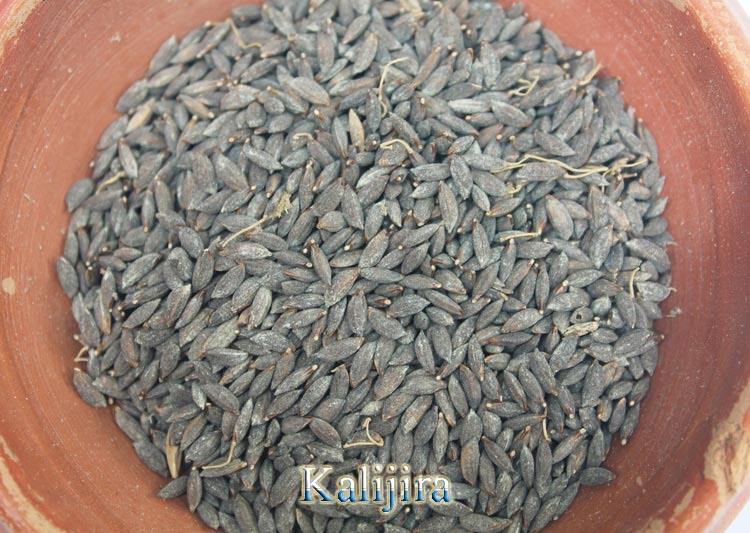 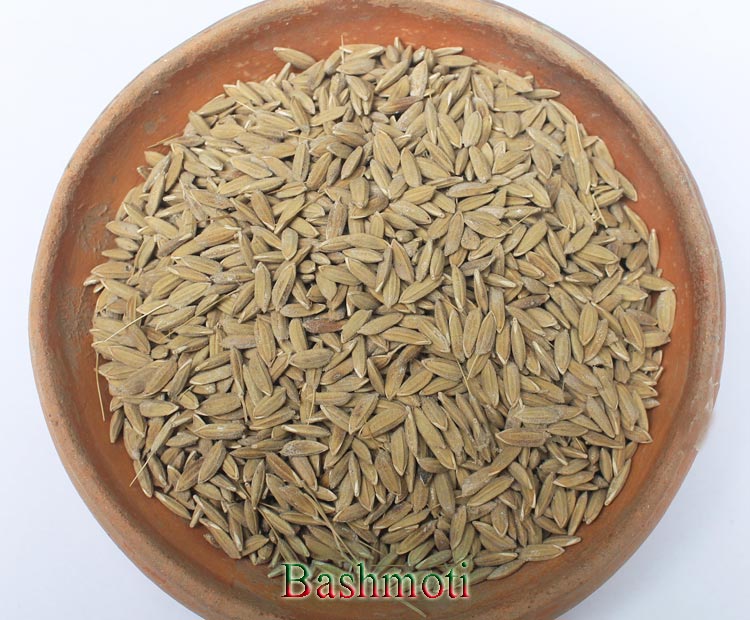 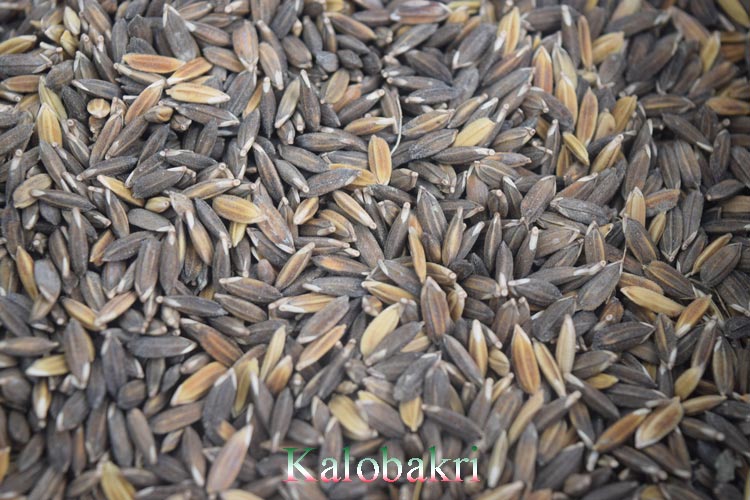 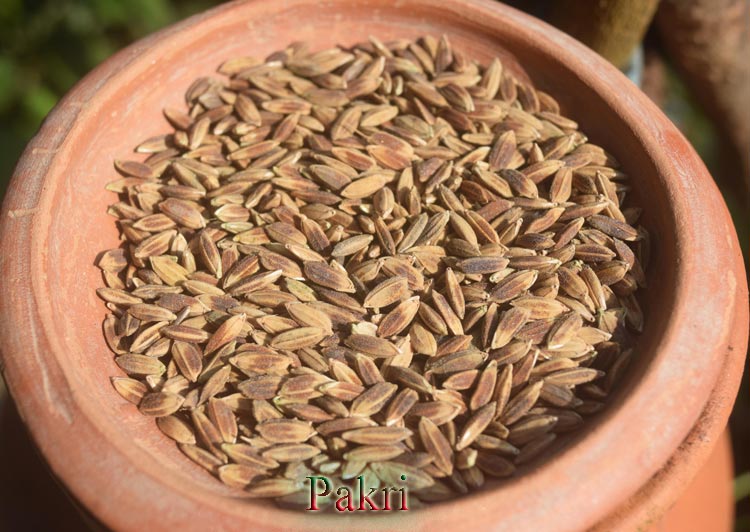 Pulao is rice cooked with butter-oil and with flavours of hot spices. Aromatic and non-aromatic fine quality rice are used for cooking pulao. These are Kalijira, Chiniguri, Ukun modhu, Bashmoti and Radhuni pagol. 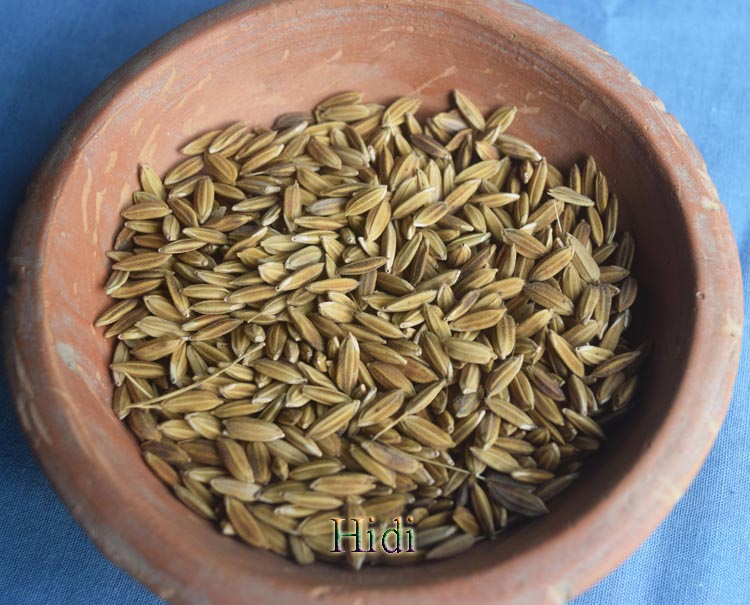 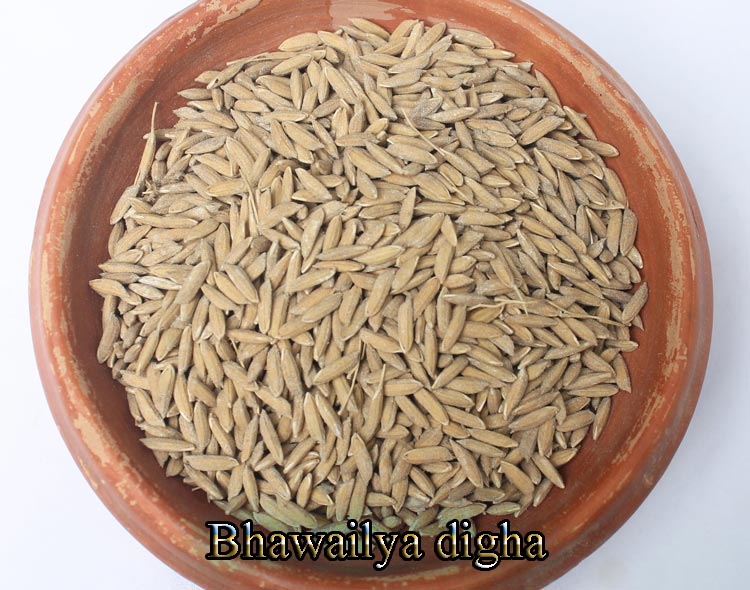 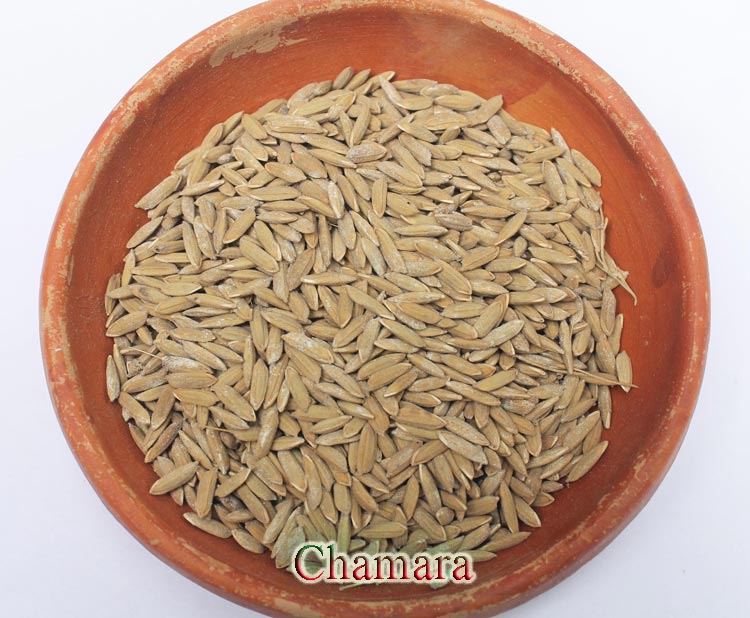 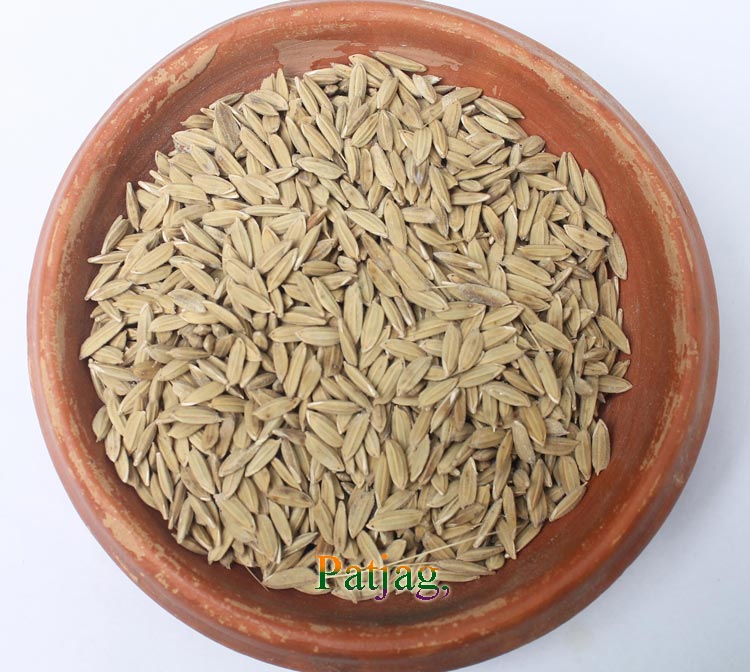 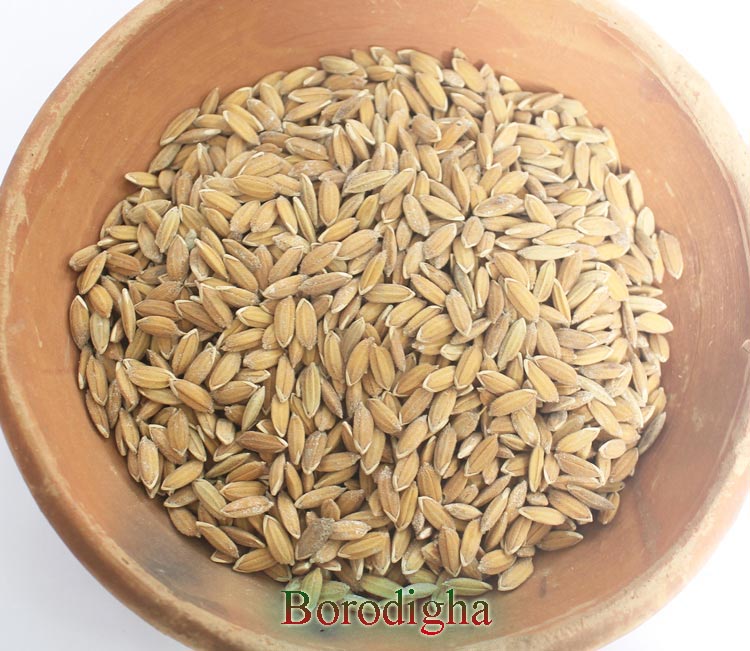 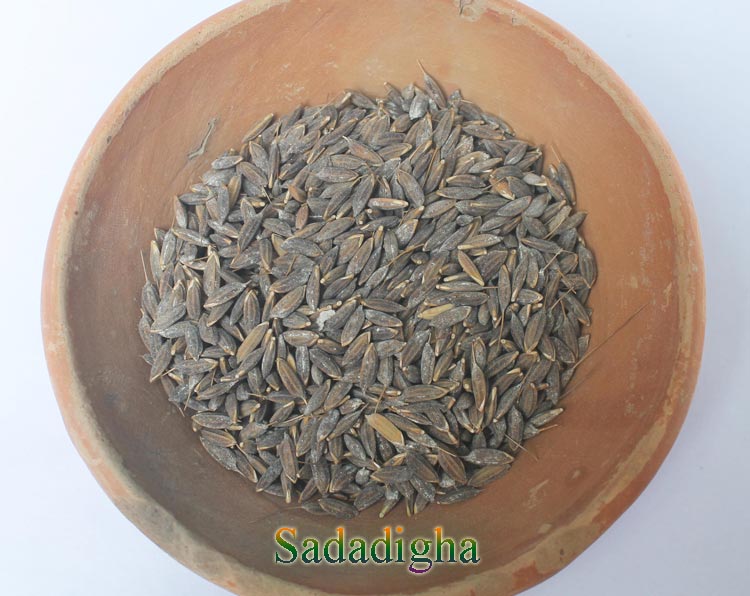 The amazing thing is that the market cannot offer enough diversity of rice for different festivals. The urban people have limited choices of varieties of Kalijira, Chiniguri and Najirshail. Organic food shops such as Shashya Prabartana offers another aromatic variety called Radhunipagol, which can be used for Pulao and Khichuri. In the villages there is more diversity than in the cities. Similarly for ruti, there is diversity for white and red rice flour in the villages, while in the city there is only “unparboiled” or Atap white rice for ruti. For plain rice, there are many rice varieties in the categories of white and red coarse rice such as Katak, Tepa boro, Chamara etc.

The four cell exercise was done to assess the richness and evenness aspects of the varieties used by the Nayakrishi farmers. It is important to assess whether the wide diversity of rice varieties needed for the festival are shared by all the farmers and if the Community Seed Banks can play a role in providing access to the seeds to those who do not have the variety.

In Delduar Upazilla of Tangail, the situation is the following: 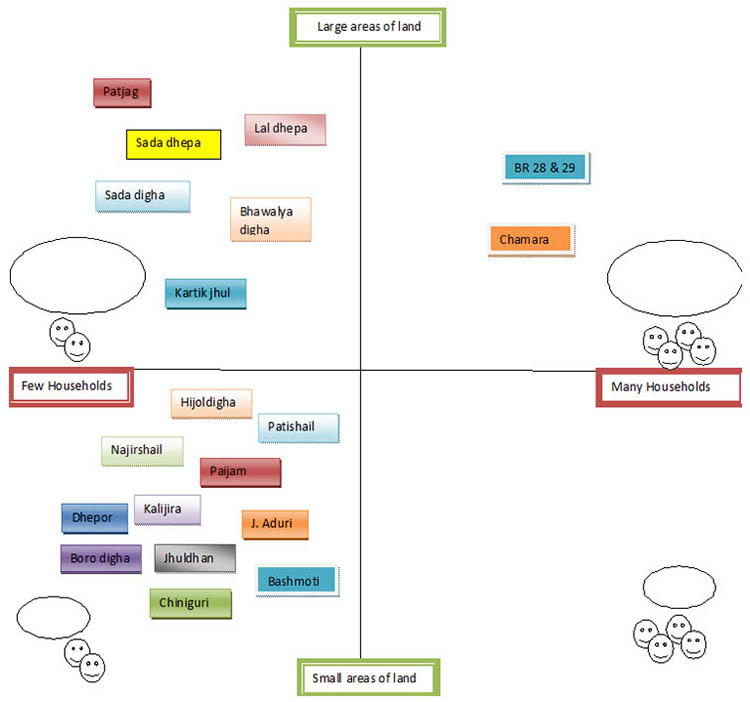 Analysis of Rice varieties in terms of land, water, seeds, usefulness and market demand in Tangail

Tangail is in the flood plain agro-ecological zone. It has many low lying lands with water. Middle and high lands are very rare. Nineteen different rice varieties were used for pithas, payesh, ruti, pulao and kichuri during Eidul Azha. Out of the 19 varieties, only 2 are grown by many farming households and in large area of land as farmers have the seeds and these 2 varieties have good market demand. Six varieties are grown by few farming households in large area of land. The other varieties which are stress tolerant (particularly flood water) and those which have longer straws to be the fodder of the cows are grown by farmers. But the non-availability of suitable land restricts their cultivation.

The rice varieties, which are grown by few farming households and in smaller area of land, are facing the challenges of lower yield, non-availability of appropriate land, shorter straws etc. But the most important reason for limited cultivation is because most farmers do not have the seeds in their collection. The seeds are disappearing. These are Nayakrishi farmers, who are growing these rice varieties, thereby are helping in the conservation of the endangered varieties as explained in the table above. 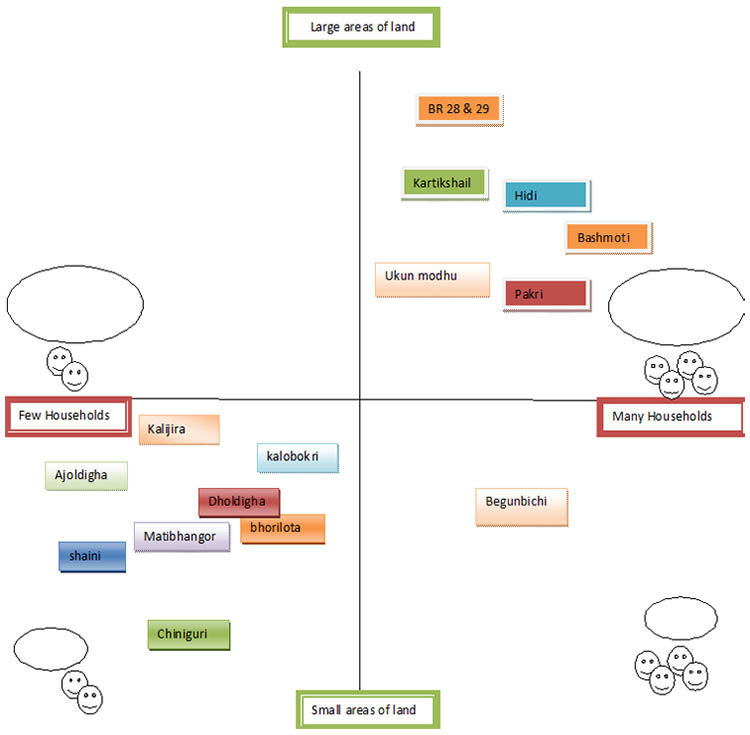 Analysis of Rice varieties in terms of land, water, seeds, usefulness and market demand in Pabna

Bashmoti, Hidi, Kartikshail and Pakri have some very important attributes for which farmers continue to cultivate these varieties and use for regular food as well as for special occasions. These are still cultivated by many farmers and large area of land is used. On the other hand, special aromatic rice varieties such as Kalijira and Chiniguri needed for pulao, payesh are being replaced by a modern high yielding variety called Ukun modhu (BRRI dhan 34) . Only Begunbichi cultivation is continued even in small area because of needs for festivals. Kartikshail is very important for the poor families who may not have stock of rice for the whole year, so an early harvesting rice variety saves them from poverty.

Climate change is affecting cultivation of a drought resistant variety, Kalobakri, because there is rain in dry season.

Salient features of the story:

b. Nayakrishi farmers are cultivating more local varieties for subsistence food needs as well as for important festivals, even though those varieties have lower yield.

c. The land type in the villages are determining factor for cultivating different rice varieties which are now being destroyed due to construction of roads and other physical facilities.

d. Climate change is affecting the traditional flood and drought resistant varieties as the rainfall and the temperature are changing and becoming unpredictable.

f. All the farmers cannot cultivate diverse seeds because of lack of seeds in their collection.

g. Local variety aromatic rice has good demand in the market and can fetch good price.

The Community Seed Wealth Centre can play an important role in ensuring preservation of the varieties that are in danger of getting lost.