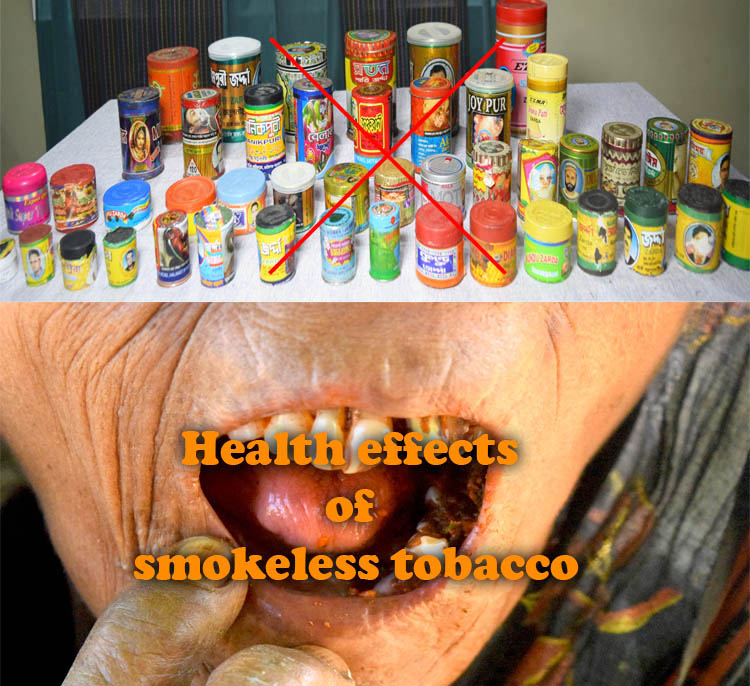 So far the information available about users is from Global Adult Tobacco Survey, 20091.

In all the categories, the indicators show trend among women with not only higher use, but also that they are not planning to quit, although they are more advised by health care providers because of serious illnesses.

Lack of awareness contributes to the low number of quit attempts for smokeless tobacco users in the Region. For example, the percentages of users who made a quit attempt in the past year was very low in Bangladesh (29%), India (35%) and Thailand (22%). 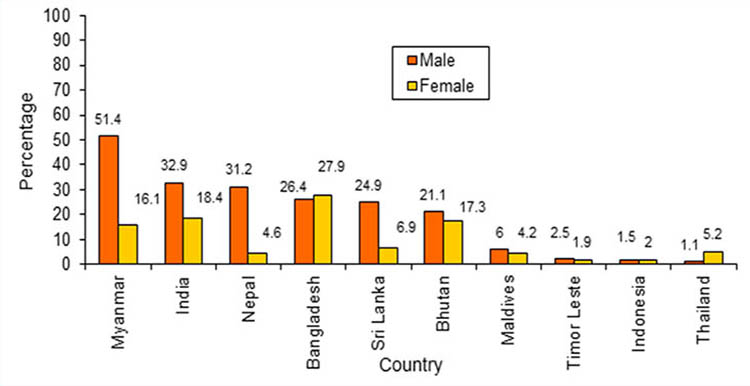 Bangladesh is the only country in the region followed by Bhutan which has higher use of smokeless tobacco among women. Thailand has very low rate of SLT use, however more among women (5.2%) than men (1.1%). It means, there has been less effort from the tobacco control advocates to work among women for reducing tobacco use, and that the law itself did not address the issues that will help reduce consumption. The need for regulation becomes even more evident for smokeless tobacco consumption for the sake of saving women from health hazards.

Smokeless tobacco (SLT) as included in the definition of Tobacco products under the “Smoking and Tobacco Products Usage (Control) Act, 2005 (amended in 2013)” includes Zarda, Sadapata and Gul as three most used products in Bangladesh. Over 10 million women consume Zarda, Sadapata and Gul without any regulations on their use. Considering the threat that smokeless tobacco use can pose to public health , it is of critical importance to identify and promote methods for reducing the use of smokeless tobacco.

Tabinaj members conducted a survey in 19 districts with 288 users with a questionnaire to know about some basic facts about Jarda-Sadapata use. Although members are spread over 64 districts, these 19 districts were selected randomly on the basis of members’ capacity to provide information within a week in late April, 2017. The districts are Khulna, Bagerhat, Sathkhira, Borguna, Barisal, Manikganj, Cox’sbazar, Chittagong, Noakhali, Feni, Comilla, Rangpur, Bogra, Madaripur, Chapainababganj, Mymensingh, Jamalpur, Sirajganj and Kushtia.

“Paan khaoya” or consumption of betel leaf with jarda and sadapata is not seen as a social nuisance or a bad manner. One can offer Paan to guests, relatives, family members except to very young children. To have a “Paan dani” – a designated pot of paan, jarda and sadapata is common in many households. Poor people find it very attractive to offer paan to any visitor, guests and relatives as they cannot offer tea, or any snacks. But at the personal level, the consumption becomes a habit and addiction.

The users (288) in the survey were found to start at an early age of less than 20 years (43%); however the majority (79.5%) started between 20 to 30 years. This means, most women started using betel quid afer marriage. About 14% started when they were over 31 years old. Very few (6%) women started over 40 years. Those who are current users they have been consuming paan with jarda/sadapata for over 20 years.

But none of the users would admit that they were consuming paan and jarda for addiction. It was a social and family practice. Only 9% started consuming on their own initiative, 47% were influenced by mother or mother-in-law as they were making paan for them. Other family members including husband, aunts, neighbours, relatives were responsible for 36% users. Through grandmothers, only 4% users started paan. Once they started it became a habit and later they cannot stop it.

But Paan, jarda, sadapata are not any home-made products. These have to be bought from the shop and one has to spend a certain amount of money to buy paan, jarda, sadapata. The survey found that 47% users spend betwen Tk.200 to Tk. 500 for paan per month, and 28.5% spend over Tk. 500. On an average the monthly expenditure on Paan is Tk.505.

There are different brands of jarda in the shop and the users spend seperately for jarda. About 46% of the users spend Tk. 50 to Tk.200 for jarda, while 24% spend Tk.200 to Tk. 500. The average spending on jarda is Tk. 185 per month. The average yearly spending on jarda per user is Tk.2,220. The 288 users in the survey are paying Tk.53,280 per month, Tk.6,39,360 per year to the company. The alternative use of the money spent on Paan-Jarda would be, according to the users, to use for the family needs, for daily food cost. They could use it for the children’s education, particularly to buy pen, note book etc.

Expenditure on Paan with Jarda-Sadapata takes a considerable share of monthly income of these low income users. With an average of Tk. 7500 monthly incme they spend about Tk.690, which is 9.2% of the income. For the 288 users the total spending on Paan and jarda-sadapata is Tk.198,720 per month and annually Tk. 2 crore 38 lakh and 1400.

A Tabinaj investigation of 10 retail shops among 47 retail shops in Kawran Bazar (5), Shyambazar (35) and Chawkbazar (7) was conducted during March 30-31, 2016. Fortyfive different brands of Zarda, 3 brands of Gul, 2 different sizes of Sadapata and 1 brand of Khoini were found in those shops.

The pricing of the smokeless products are by size and amount of Jarda, Gul, Sadapata and Khoini. Only three brands of Jarda are found to be sold as piece, only Tk. 2 per piece for Mokimpuri and Golai Jarda and Tk. 5 for Dhaka Zarda.

Price range of Jarda by size and amount is the following:

The average size and amount ranges between 20 to 50 gram between the price range of Tk. 15 to 50 per packet.

The prices of Jarda packs increased by Tk. 1 or 2 for low priced brands and Tk. 5 to 10 for higher brands making it less significat in terms of having an impact on the consumers.

Tabinaj interviews of doctors on health effects of SLT

The medical practitioners are aware of the health effects of SLT use as they were getting patients with various health problems. They have identified particular health effects due to use of smokeless tobacco as unlike smoking, smokeless tobacco goes into the blood stream and causes health hazards. It causes various problems of the gum and teeth, lesions inside the mouth, oral cancer, throat cancer, pancreas and stomach cancer. SLT users may also get liver diseases.

Pregnant women consuming SLT may deliver low weight babies, can have still birth and babies with birth defects. The brain of the baby can get affected. It can increase the threat of maternal mortality and infant mortality.

[1]  International Agency for Research on Cancer (IARC) Smokeless tobacco and some tobacco-specific N-Nirtosamines, vol 89 of IARC Monographs on the Evaluation of Carcinogenic Risks to Humans. Vol. 89 World Health Organization International agency for Research on Cancer; Lyon, France: 2007 in Smokeless tobacco product prices and taxation in Bangladesh: Findings from the ITC survey by N Nargis, AKMG Hussain and GT Fong, 2014