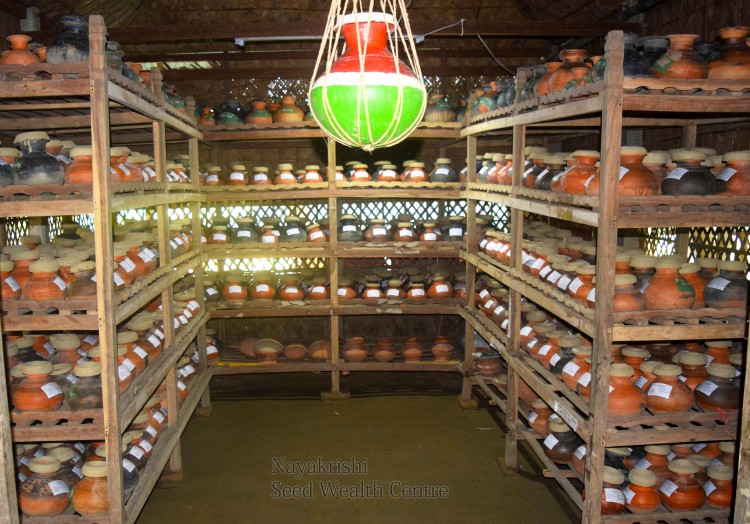 THIS year, aman rice suffered severe loss due to a series of floods and untimely rain. At the household level, the farmers will have shortage of rice for consumption and selling, while at the national level people will inevitably face crisis of food since aman paddy cultivation provides 35 per cent of the total rice production of Bangladesh. Due to the recurring floods, farmers missed the planting season in the month of August. Most farmers could not prepare the seedbeds. In some areas, floods submerged the paddy fields with saplings of aman paddy. In August 2020, according to the ministry of agriculture, it has happened in at least 37 districts.

The Moushakathalia village in Tangail is one such unfortunate village that has lost the aman rice crop. In addition, the paddy fields were infested with water hyacinth that came with the flood water and could not be cleared because of water logging. The seed beds of the aman paddy were washed away. In the harvesting season in November, the farmers therefore had nothing to harvest. They are busy with clearing the water hyacinth to prepare the land for winter crops of vegetables, mustard, lentils, etc. 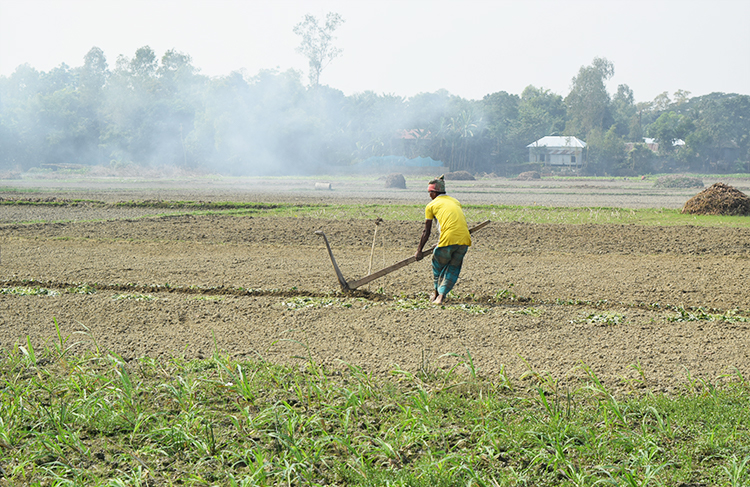 Water hyacinth (Eichornia crassipes), or kachuripana, as it is known in Bangla, is a tropical, floating aquatic plant, of Latin American origin. This aquatic plant is considered invasive throughout the world because it grows rapidly and can form thick layers over the water and kill other aquatic plant including aman rice. The devastation of aman rice this year reminds us of the situation in the 1920s when all water bodies of Bengal was clotted with this invasive plant. River navigation was obstructed and cultivation of wetland crops, particularly deepwater aman paddy and jute became difficult which eventually gravely impacted the economy of Bengal. 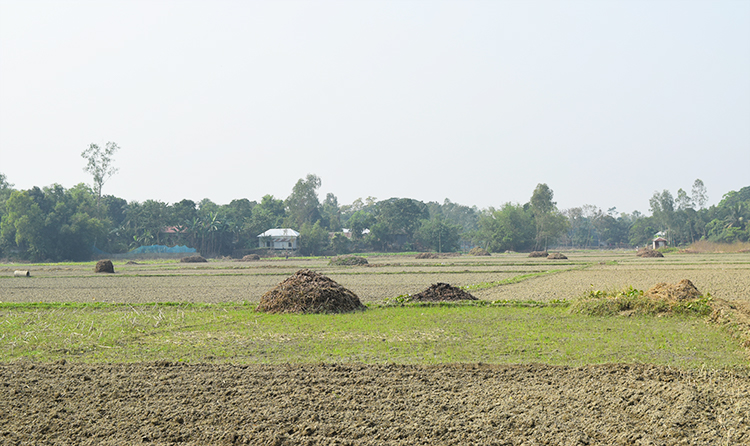 While we were discusssing the scale of devastation this year with Rupashi, Ainuddin Mia, Rahima Begum, Hafizuddin Mia, Alam Mia and other Nayakrishi farmers in Moushakathalia, the past history and the present experience showed clearly that food crisis is imminent. However, Nayakrishi farmers are equally worried about where to get the seeds for the next aman season. They asked, ‘Bechon pabo kothay?’ (‘Where will we get the seeds?’). These are farmers who grow several traditional varieties of aman paddy and have their own collections of seeds at their household as well as in the Nayakrishi Seed Wealth Centres, a collective effort of farmers to attain seed sovereignty. Since the loss of the aman crop is so widespread and devastating this year, Ruposhi raised deep concern not only for herself alone but for all the farmers growing traditional or local rice in her village as well as in the country. The concern is very genuine. We often ignore the urgent necessity to conserve seeds to keep the wheels of farming turning when encountered with immediate crisis of food. 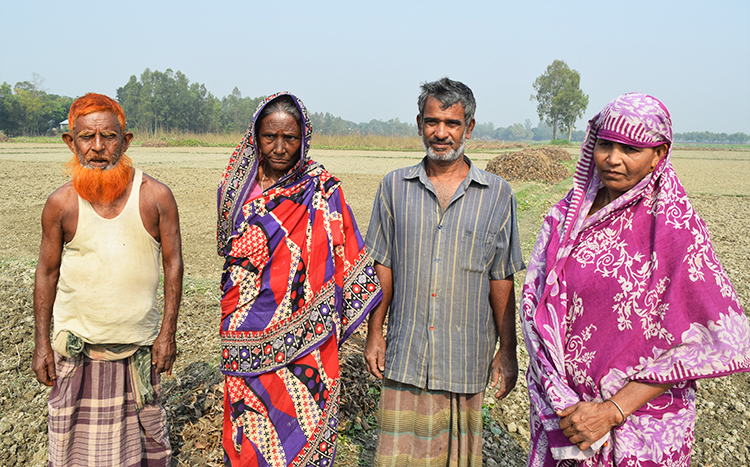 The reality of the questions related to food and seed sovereignty is acute because the government and the private sector, particularly the corporations and non-governmental organisations, are only promoting the laboratory-seeds of high-yielding variety, hybrid seeds and even trying to promote genetically modified rice seeds in the name of nutrition and stress tolerance. The local and traditional varieties were lost not only to the flood water; there are other reasons as well. For example, water logging from ill-planned construction of roads and other infrastructures. The flood water often could only recede up to the height of the roads. Constructions of such roads, ignoring the agro-ecology and farming practices, have started to take its toll. The man-made causes exacerbated the natural disasters. However, it was also noticed that the HYV numbered rice varieties that were promoted as stress tolerant could not survive at all. The farmers’ seed have more resilience than the HYV/hybrid seeds.

Yet the farmers’ seeds are traded off for the HYV/hybrid seeds for the sake of corporate interests. Let’s see how the land area under aman rice crop is distributed among the different types of rice seeds. Two types of aman paddy are grown — broadcast aman (sown in the month of mid-March to mid-April in the low lands) and transplant aman (planted during late June to August with the planting of seedlings). Aman is dependent on the tropical monsoon rain. In terms of types of seeds, particularly in the modern agricultural system, the high yielding variety and hybrid aman seeds are used which are mainly dependent on fertilisers, pesticides and requires land types that are flood-free. These are dwarf varieties with more grains and the straws in this case are not calculated in the yield. The Bangladesh Rice Research Institute has developed 56 HYV aman varieties such as BRRI 11, 22, 54, 94, 95 — all are numbered rice varieties. The BRRI has also developed seven hybrid rice varieties. Since 1993, hybrid rice has been researched and it has been promoted more aggressively after the flood of 1998. NGOs with micro-credit programmes forced the farmer-borrowers to take Alok-6201 hybrid rice. Most hybrid rice are for the boro season and only 10 hybrid ‘brands’ of aman rice, out of 170 brands, are offered by national and multinational private seed sellers. These are registered and officially notified by the National Seed Board, ministry of agriculture (Database of National Seed Board, 2018). The multinational companies are Syngenta, ACI, Bayer CropScience, etc.

The BRRI gene bank (established in 1974) has 7,500 varieties of rice germplasm collected from the farmers of Bangladesh. Farmers like Ruposhi Begum are the ones who grow the local variety of aus and aman. In the Community Seed Wealth Centre of Nayakrishi, there are over 2,500 varieties of landraces of rice varieties that grow in different parts of the country. The farmers themselves keep at least five to six varieties in their own collection which they need for different social, economic, religious and cultural needs. The small-scale but solvent ‘greehosto’ farmers would like to have rice produced for the staple food, ie, ‘bhat’, but they also need some aromatic varieties for pulao, payesh, etc. For that they cultivate varieties such as radhuni pagol, kalijira, kataribhog; for ‘chira’ (pressed rice) kolamocha, kartik shail, malia; for ‘muri’ (puffed rice) narkel jhopa, lal shail, ghigoz, pakri. In some areas, with favourable geographical location and proximity to rivers, some rice varieties grow in water and can survive the regular and normal flood. For example, the land near the Dhaleswari river in Tangail has a particular rice variety called chamara that can survive in flood water. As aman grows in the monsoon season, the normal flood is very much welcomed by the farmers because it brings the alluvium from the Himalayas. Most of the local variety aman can survive flood water, which the ‘numbered’ HYV and the hybrid varieties cannot.

Farmers’ seed sovereignty depends on their control over the seeds they can preserve and use according to their own social and cultural needs. The cultivation of local variety aman means that the farmers can make a choice regarding the varieties they want to grow. As a farmer was saying, ‘My daughter is growing up. She will be married soon. I will have to invite my son-in-law, his family and other members of society and feed them good food. So I will cultivate aromatic varieties and others to cook pulao and make pitha’. Monocrop cultivation of numbered HYV/hybrid varieties compels farmers to buy the seeds from the market.

Unfortunately, farming as an interdisciplinary mode of engagement that demands knowledge and practices based on the environment, ecology and history of knowledge practices of farming communities has been systematically ignored in favour of modern varieties based on chemical fertilisers, pesticides and extraction of ground water. Agricultural research prioritises commercial varieties of seed and supports pesticide companies and not the farming communities who feed us. The national rice cultivation plans, sadly, do not depend on the farmers’ needs but on the control of technology and corporate interests. Aman, which is dependent on the monsoon rain, used to be the main rice crop. But with the introduction of the ground water irrigation technology incorporated by HYV seeds, the cultivation of dry-season boro rice has been encouraged and thereby boro now accounts for 55 per cent of the total rice production as opposed to 36 per cent aman rice. The environmental and ecological consequences of such practice are enormous. So-called modern varieties not only replaced the seasonal but also the local or traditional varieties. It is acknowledged by researchers that more than 1,000 traditional rice cultivars are being grown in Bangladesh and are maintained by farmers due to their wide adaptability, superior grain quality, and resistance to abiotic and biotic stresses. These rice varieties grow in coastal areas, low and deep water conditions. At the same time, these are undermined by policymakers on the grounds that these have lower yields compared to the HYV. Despite the lack of support from the government, the seeds are preserved and maintained by the farmers themselves.

The shift from local varieties to the HYV varieties increases dependency on the use of chemical fertilisers, pesticides and fossil fuel based technology. The shift to boro season for rice is actually a shift from farmers’ knowledge and experience-based systems to the use of technology, more chemicals, ground water irrigation and HYV and hybrids seed types. Bangladesh used to have two rice seasons, aus and aman. But introduction of boro has displaced aus because the land remains occupied by boro rice. In short, rice production is going out of the farmers’ hands to the corporations that promote HYV and hybrid seeds and threaten the sovereign rights of farmers.

It is wrong to say that only the numbered laboratory-based rice are high yielding and the traditional varieties are all low yielding. There are at least 20 different traditional varieties of aman such as dhepa, chamara, sadamota, digha which have a yield of more than six tons per hectare along with 10 to 15 tons of straw that are used as fodder. Only the aromatic and thin varieties of rice have lower yield per hectare, such as radhuni pagol (1.4 ton/hectare and four tons of straw), badshabhog (two tons/hectare and 4.7 tons of straw). There are also many stress tolerant — flood resistant, drought tolerant, salinity tolerant and cold tolerant — local varieties of paddy. Bangladesh did not need three seasons of rice production; aus and aman were enough to feed the people of the country. In the boro season, farmers could instead cultivate other food crops such as vegetables, lentils, oil seeds which are as important as rice. Food does not mean only rice, but a combination of rice, vegetables, lentils, fish and others. The increase in boro rice production led to the decrease in the production of other winter food crops. We must change our narrow perspectives. 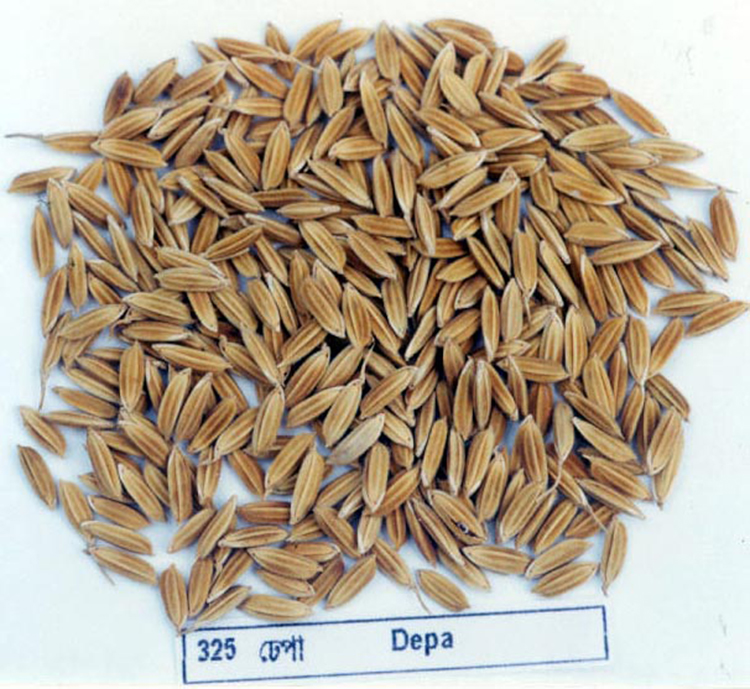 Bangladeshi farmers are mostly rice producers. The change in rice production and the shift of the seed varieties from traditional to the HYV/hybrid varieties are threats to the farmers’ survival. Ruposhi’s question, ‘where can we get the seeds?’, actually reflects upon the fact that farmers’ landraces are declining and there is no effort from the government to enhance the cultivation of these varieties. However, Nayakrishi farmers promised other farmers that they can collect and exchange seeds for the next season. Nayakrishi is a farmers’ network to ensure food and seed sovereignty despite the odds faced by farmers and the policy ignorance of a country that cannot survive on the systematic destruction of the ecological foundation of agriculture that conserves and reproduces the biodiversity and genetic resources of a nation. It is time we changed our mindset.