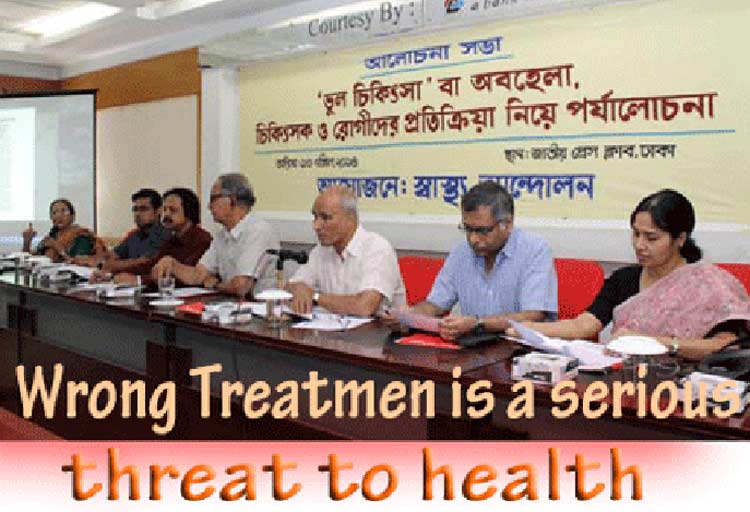 Bangladesh health care system, both public and private, is facing  serious ‘allegations’ of wrong treatment of diseases resulting in the death, casualty or disability of the patient. The news is published in daily newspapers coming from almost all the districts of the country.  Although it is not a new phenomenon at all, but massive complains It indicate that wrong treatment is widespread  and happening again and again with no solution in sight.

The recent incident of such “wrong treatment” in one of the private clinics in Rajshahi made another news headline not only for the death of the patient who died at the clinic, but because doctors went on an indefinite strike from the morning of March 28 and therefore the medical services at the government and privately-run hospitals and clinics in the city came to a complete halt. The doctors’ strike was to protest the court order that sent the doctor, also the owner of the clinic, to jail for the alleged “wrong treatment”. Seven organizations, including Bangladesh Medical Association of Rajshahi Medical College Hospital (RMCH), Bangladesh Medical association (BMA), and Swadhinata Chikitshak Parishad, announced the strike demanding the release of Dr. Samiul Haque Shimul, owner of Dolphin Clinic. Earlier Rajshahi’s chief metropolitan magistrate sent Dr.Samiul Haque Shimul to jail on 27th March after rejecting his bail petition in a case filed in connection with the death of a patient in his clinic. Undoubtedly the sudden strike of doctors threw thousands of patients into incalculable suffering.

Shasthya Andolon has been collecting and compiling the news clippings of “wrong treatment”, negligence, doctors’ and patients reactions to such incidents. The newspaper reports of 2013 shows that in 29 cases the report headline was “wrong treatment” which included 27 death cases and 2 disabilities, in 7 cases the headline was death due to “negligence”. In addition there were death cases due to treatment by “False” doctors. Among the deaths there were 14 children, 13 women, 11 men and in one case report did not mention man or woman. In cases, particularly in case of deaths of patients, in 4 reports there were reactions from the relatives leading to vandalizing of the clinic/hospital. It was also found that in 3 cases, the doctors took revenge by going on strike and bringing medical services to a standstill causing suffering to the patients. In 6 cases, there were physical attacks on the doctors by the patients’ relatives or miscreants. Hospitals were obstructed and in 5 cases the relatives protested against the doctors. This has become a major concern, and more importantly mistrust on the doctors in a more generalized way is escalating. These information were compiled from 10 most important newspapers including Ittefaq, Samakal, Bonik Barta, Naya Diganta, Jugantar, Inqilab, Kaler Kontho, Prothom Alo and Amar Desh.

In this context, Shasthya Andolon organized an analytical discussion meeting on “Wrong Treatment or Negligence: Reactions from patients and doctors” on 13th April, 2014 at the VIP Lounge of National Press Club. Besides, Shasthya Andolon members the meeting intended to reach the journalists who report on such incidents. A good number of online and print and electronic media journalists (including Bangladesh Betar) were present. Shasthya Andolon also made links with other health networks such as Doctors for Health and Environment, Bangladesh Medical Association (BMA) members, individual doctors, Consumer Association of Bangladesh, doctor from BSMMU, Dhaka Community Hospital, Population services & Technical Centre ( PSTC), DORP etc. and their representatives were present. Although the meeting was planned for a maximum of 60 participants, there were 81 participants (including the journalists).

In the Wikipedia, the term “wrong treatment” is not found, but there is medical error, which is a preventable adverse effect of care, whether or not it is evident or harmful to the patient. This might include an inaccurate or incomplete diagnosis or treatment of a disease, injury, syndrome, behavior, infection, or other ailment. More specifically, a medical error occurs when a health-care provider chooses an inappropriate method of care or improperly executes an appropriate method of care. Medical errors are often described as human errors in healthcare. http://en.wikipedia.org/wiki/Medical_error

Medical errors do not happen only in countries like ours. According to the Institute of Medicine (2000) medical errors are estimated to result in about between 44,000 and 98,000 preventable deaths and 1,000,000 excess injuries each year in U.S. hospitals. About 1% of hospital admissions result in an adverse event due to negligence. However, mistakes are likely much more common, as the studies identified only mistakes that led to measurable adverse events occurring soon after the errors. Independent review of doctors' treatment plans suggests that decision-making could be improved in 14% of admissions; many of the benefits would have delayed manifestations . Doctors’ strikes are also common in other countries, particularly in India and Nepal causing suffering to the patients. In Uttar Pradesh (India) the six-day strike has adversely hit medical services in several parts of the state. The medicos were protesting after their colleagues at GSVC medical college were allegedly beaten up by Kanpur Police and supporters of SP MLA Irfan Solanki on February 28, 2014 following an altercation with him. http://timesofindia.indiatimes.com/india/UP-doctors-strike-HC-orders-judicial-probe-transfer-of-cops/articleshow/31475982.cms. Around 200 surgical procedures have been cancelled in the days of strike. A strike by doctors in Nepal left tens of thousands of patients with access only to emergency care as physicians demanded sweeping changes to the country’s medical education system. http://www.thehindu.com/news/international/south-asia/nepal-doctors-strike-leaves-thousands-without-care/article5596456.ece

Prof. Rashid-e-Mahbub initiated the discussion. The relation between a patient and a doctor is of confidence. On the basis of this, a patient in need of treatment goes to a doctor. But some “undesirable incidents” may occur which breaks this trust and confidence. One should know that it is not enough to become a “doctor” if he/she has completed medical course from a Medical College/University. One has to get the certificate from the Bangladesh Medical and Dental Council (BMDC). Yet those who got the certificate can do something that can be termed as a mistake or an error. There is nothing called “wrong Treatment”, it can be a negligence act. We do not say Wrong Judgment in the case of Court cases, and then it will be termed as contempt of Court. For the doctors, anybody cannot just say “wrong treatment”. Journalists reporting on such incidents must pay attention to such judgmental headings. Doctors are also human being; they can make mistakes or even can be blamed for negligence. But they are not criminals. One can question whether a doctor is skillful or not. Whatever the case is, the question remains that why a patient who is paying for the services (out of pocket) should face negligence. Who should be there to ensure proper services to the patients?

The Bangladesh Medical and Dental Council (BMDC) are not empowered to take punitive actions against the doctors. It is weaker than the Press Council. They can only cancel the registration. There should be laws for compensation to the patients in the case of “undesirable occurrences” and also laws to protect the physicians so that they are not victimized. However, all these measures will increase the cost for the patient because the doctors will ask for more diagnostic tests before a treatment is given. The Law Commission is acting on such law. In India, there is no “criminal offence” in the case of doctors related to any treatment and they cannot be arrested. There should be ways for negotiations and amicable settlements between the doctors and the patients.

Syed Mahbubul Alam of WBB Trust said the healthcare system is overloaded. There are only 61,000 doctors, the number of outpatient service is 130 million and over 45,000 persons are receiving services as indoor patients. These are the statistics which indicates that in the government hospitals there can be negligence or “wrong treatment” as they are dealing with huge number of patients. One should also appreciate their workload. We cannot blame all the 61,000 doctors for the mistakes committed by one or two doctors. So the generalized mistrust and allegation is not acceptable. The BMDC has proved to be a useless institution that should at least provide a list of the certificate holding doctors. So that the certificate holding doctors can be identified. The website of BMDC is not functioning. The Ministry of Health and Family Welfare has not taken any measures against any allegations of “wrong treatment of negligence. They are completely silent.

Dr. Lenin Chowdhury provided a picture why the services cannot be provided properly. In the Upazilla hospitals, doctors are asked to write only 5 medicines. Referrals are discouraged because then there will be demand for Ambulance services. Ambulances are not “functioning” for unknown reasons. So there are genuine cases to become corrupt and to make mistakes in treatment. But there is no institution to oversee the system. Moreover, health services are no more “care” it has become a “commodity”; so there is much less opportunity to hold anybody accountable for the mistakes of “wrong treatment”. In the case of arrests of doctors, it should be done only after proper investigation and charges.

Dr. Abu Sayeed echoed the statement of Dr. Lenin by saying that health care is commercialized. Under the so-called Public-Private partnership (PPP) privatization has been encouraged, and with the strength of capital they are commodifying the healthcare services. The doctors are now aspiring for living a luxurious life with cars, ownership of buildings and upper status life style. And those who don’t have these facilities as they want to perform care rather than make money are called “Fakir (begger) doctor”.

Dr. Dipal Adhikari raised concerns about assault on the doctors in the cases of dissatisfaction of the patients’ relatives. He mentioned that there was no First Information Report (FIR) in the Police Station against the doctor in Rajshahi, yet he was arrested. It is true that the people are losing faith or trust on the doctors. They take more than one opinion for taking a decision of treatment. There is no institution where the doctors can also seek support in case of assault on them.

Most of the discussants were of the opinion that in the proven case of intentional mistakes or negligence some actions must be taken. There should be a body for the surveillance of healthcare system. The Public Health Ordinance does not have any clause on medical negligence.

The absence of law, surveillance, inadequate monitoring and a legal system the reactions of patients relatives, doctors and the rapid commercialization of healthcare is leading to the deterioration of the health care system and sufferers are the patients and also the doctors.

The journalists were urged to investigate the cases they write about before put a caption “Wrong treatment”. Such news may create negative image on the entire health care system. People may turn to dependence on foreign treatment rather than on Bangladesh.