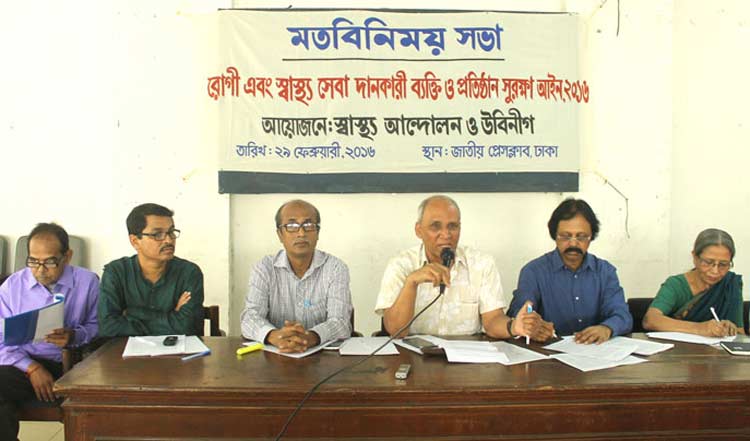 As network health activists, Shasthya Andolon (Health Movement) expressed its deep concern over the proposed act because of its implications for patients’ rights as well as health service providers. Shasthya Andolon (Health Movement) in collaboration with UBINIG, a policy research organization held an OPINION SHARING MEETING on 29th February 2016 at 11:00 am in the Seminar Room at the National Press Club, Dhaka.

There was a great interest among the participants at it was very timely as well as a public issue and intends to ensure quality of treatment, dignity of physicians, accountability of physicians, patients and patient’s relatives and justice for all those related with health service.

In her opening remarks, Farida Akhter described the background of this proposed Act. She also narrated how Shasthya Andolon (Health Movement) works to create consensus among the different groups of people including physician, expert, researchers, social activists, women leaders and others to act on public health issue. At present, the proposed Act is a concern from health service delivery point of view and it is linked with the people interest of all sections. The Act was earlier proposed in 2014 and Shasthya Andolon (Health Movement) provided its’ collective opinion on 22nd February 2015. The opinion focused on justice so that neither the physicians nor the relatives of the victim patients are harassed. But if there any negligence from any one, he or she should be accountable. However, the respective Ministry did not recognize it and came up with a new version of the Act apparently only to protect and save the service provider institutions. The written analysis of Shasthya Andolon about the Act was read out by Shasthya Andolon member Ibnul Sayeed Rana.

“Proposed Act is not acceptable” said Prof. Rashid e Mahbub in his speech. He said instead of proposing any law, the Government should ensure quality treatment and accountability of the physicians. The Government should strengthen the role of Bangladesh Medical and Dental Council (BMDC).

Prof. Rashid e Mahbub said, People demand for better service and treatment. So the physicians should stop malpractice and they should not advice for unnecessary investigation. The Government should have regulations for the private hospitals, clinics and diagnostic centers so that they should maintain their quality of services.

The consumer awareness and education is very necessary aspect. Prof. Rashid also said, there is a strong need to include civil society to act and to bear some responsibility. The proposed Act mainly deals with physicians, patients and the relatives of the patients. But health care itself as such a huge issue and linked with all aspects of the society, so all other sections including civil society must be linked.

Professor Rashid said, there are a number of acts and laws, but there is no active implementation. Therefore coordination of existing laws and acts may provide better ways rather than propose a new Act.

Dr. Faizul Hakim strongly opposed the proposed act and said categorically that on behalf of Council for Public Health Movement ‘we reject the proposed act.’ He said, it is assumed that the main purpose of proposed act is to serve the rich people and to srrve the capital rather than people. It does not ensure accountability and quality of service.

Dr. Faizul Hakim mentioned that the shortage of health manpower is a big issue, which creates many problems in Health care sector.

Dr. Lenin Chowdhury, in the beginning of his speech said that the proposed act cannot serve the interest of both the physician and patient. The proposed act has huge contradiction and lack of clarity and transparency. The act did not define the negligence of physicians and how much compensation a victim would get in case of death or loss of any part of the body or any other loss. Similarly, the act says that dealing with health issues and treating the ill people is a good work, but it is clear that the ultimate goal of the act to make the private service providers on a strong-base to make more and more profit. Dhaka City Corporation is now insisting the physicians to get Trade License from them, it means the physicians as a health service providers are now traders.

Dr. Lenin Chowdhury said, we should keep BMDC as a neutral and respected authority. We should engage BMDC as a dispute settlement authority.

Advocate Mahbubul Alam said that there have been many incidents leading to huge indiscipline visible in the health care service delivery. The reactions of people, as victims of negligences, are the manifestation of that. The proposed Act will create more difficulties. But the Government and Ministry of Health and Family Welfare is not addressing the root causes of these problems. The main purpose of the act is to give a strong legitimacy for the private health practitioners, even if they make the patients hostages of their demands. Since non-medical personnel, that is, the businessmen are becoming the owners of the private hospitals, clinics and diagnostics and since profit is their main motive, they have no ethical obligation to the patients. Most of private hospital, clinics do not even feel the responsibility to inform the relatives of the patients about his or her health or recovery status, risks treated in the Intensive Care Unit etc. Patients under life support are kept even beyond death, the private hospital, clinics do not disclose the fact even the patient is already dead. This is unethical. 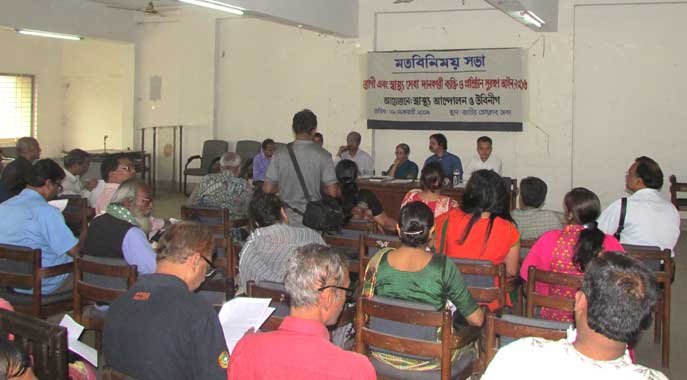 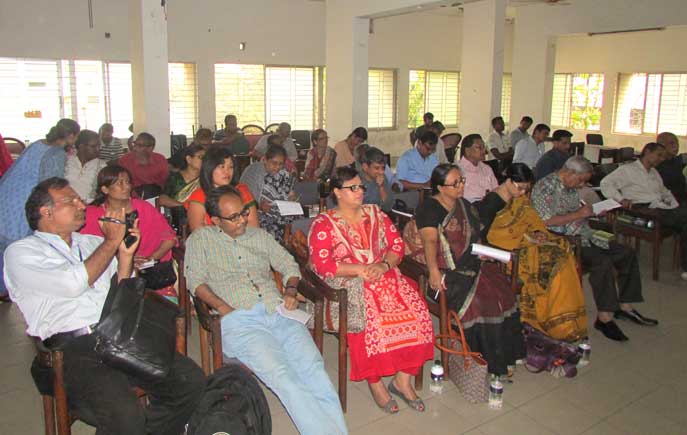 They mentioned that that this is a contradictory Act and it cannot serve and protect both the physicians, service providers and the patient. They mentioned that the Government should find the root cause (s) in the health care service delivery and pay respect to the peoples’ needs and demands. They also mentioned that to make an effective Act the representatives from most of the potential sectors and stakeholders should be included.

keep the process continue to review the proposed Act as it serves neither the patients, nor the service providers including doctors, nurses, technicians working at the hospitals.