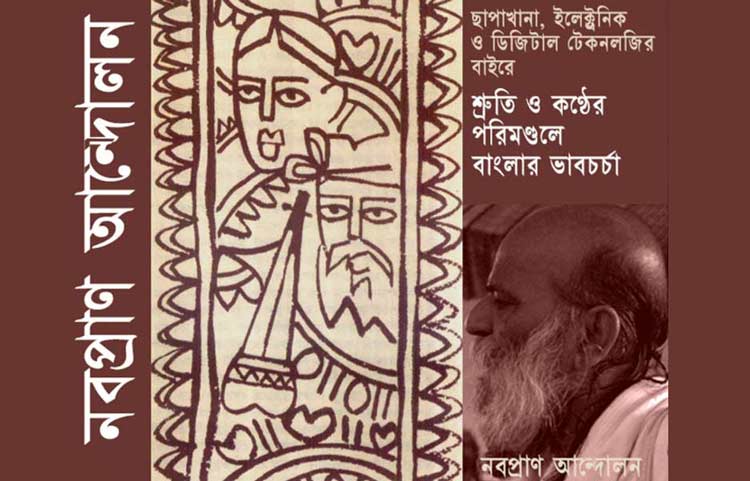 Nobopran Andolon is a cultural approach to interrogate and redefine ‘development’, and ‘progress’ by people’s popular philosophical discourses and ethico-moral world. The practice challenges prevailing cultural divide created by technological hierarchiess such as between literary and oral, digital and non-digital, audio-visual and experiential, etc. These divides pre-determines how we value discourses formed in daily life struggles of the people and dictates interpretation. Nobopran explores ways by which non-literate oral knowledge practice and social memory could be properly valued as against the domination of print and digital technology in order to facilitate people's voices to be audible again in an increasingly technological world.

Through poetry, music and theatrical performances Nobopran mobilizes people against caste, class, patriarchy and various forms hierarchical oppressive relations. The movement interrogates the problem of ‘modernity’ and ‘modernization’ from people’s perspective so that a dominant single narrative does not dictate the meaning of culture or essentialise or univarsalise a particular culture to impose hegemony upon others. Highlighting the importance of orality and oral knowledge practices Nobopran questions technologies at the very level that shapes thinking.

The movement draws its wealth from the immensely rich tradition of pre-literate or non-literate discourses of the rural Bengal, generally termed as bhakti-sufi-bayati traditions. The tradition is diverse and discourses among them are distinct and varied. Nobopran creates cultural awareness about different schools and trends enabling people to engage with various trends and arguments in order to assess the relevance of those long forgotten or marginalized stories, narratives or ideas for the present. Such explorations often raises profoundly significant ethico-moral and political issues relevant to interpreting the present and revalue the real life struggles of the people.

These movements are generally grounded upon the philosophy of love, care and responsibility to others and oppose all forms of violence and oppression. Through poetry, music and theatrical performance Bhokti-Sufi-Boyati traditions play powerful role in defining the meaning of community and community relations till today.

As opposed to ‘materialist’ ideology, bhakti-sufi-bayati traditions are usually termed as ‘spiritual’ discourses, privileging the materialist and ‘realist’ view of life. Nobopran breaks this binary and demonstrates how life-affirming values and philosophy of love and care is directly related the way we relate to our own bodies and nature. As a result, Nobopran discloses new grounds to radically comprehend the relation between human bodies and the nature as the unified whole and provide insights to radically understand health, ecology, environment and the role of our subjectivities in conserving or destroying the earth where we dwell.

The movement in practical terms collects rich songs and compositions of the saints, poets, popular rural writers of the past and the present. These are researched and practiced by the singers. The primary emphasis is given on the major figures such as Fakir Lalon Shah (-1912 Nabapran maintains an active relationship with the community popularly known as ‘Fakirs’, ‘Bauls’, ‘Dervishes’ ‘Boyati’ and saintly persons living in different parts of Bangladesh. Nobopra is particularly works with people who are socially active among the poor and the marginal population. A core group of Nabapran Andolon is regularly conducting musical programmes in Dhaka City, and other districts around the country side. The campaign on environment, agriculture and women's issues are combined with the programmes of Nabapran to make it more effective and communicative to the general people.