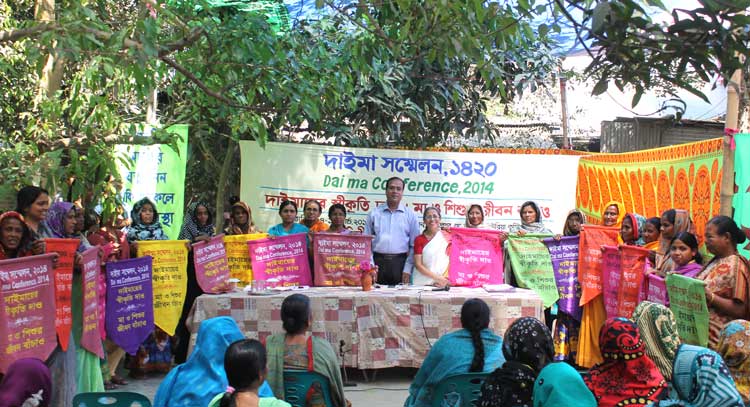 On 14th March, 2014 the traditional birth attendants (Dai) from 14 districts came to Kushtia to attend the Dai ma conference held on 15th March. Thirty six women came from various districts, including those as far as southern part of the country, Cox’sbazar, travelling in bus for over 18 hours and some from the northern district, Kurigram, where the Dai mas had to cross the big Brahmaputra river for two hours and another 9 hours from Chilmari to Kushtia by bus. Each and every Dai had travelled through different means: walking, cycle rickshaw, boat and the long distance bus or train. Many of them never travelled such long distance and majority have never been outside their own districts.

Surprisingly, once they arrived in Kushtia they looked fresh and excited, because it coincided with the big yearly ‘Dol’ festival of Fakir Lalon Shah, a famous saint of the country. This is a very popular festival for the rural people of Bangladesh who desire to visit at least once in their life time. The Dais were very happy because they would not be able to afford to come on their own. So the invitation for the conference added an extra value for them. However, the Dai ma Conference was on 15th March, just one day before the festival began on 16th March with full moon. They had the opportunity to attend the festival after the conference.

Lalon is the champion of life-affirming values both as spiritual imperative as well as practical concerns. As a result environmental and ecological concerns find strong grounds in his poetry and songs, known to the rural folks as 'kalam', endowed with divine meaning. Organising the conference in the midst of the 'dol' festival is literally the cebration of life and added deep meaning to the role of midwives in our society. 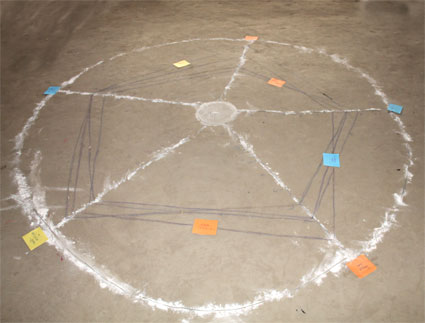 Daima's also learnt how to conduct participatory action research (Engaged Inquiry) by themselves. This tool is known as 'wheel'. It is used to assess performances of their acvtivities. UBINIG also offers training to other NGOs, public and private institutions, who are interested in action research.

This conference is part of the UBINIG programme on maternal and new born health at village level. More than 80% of the rural women have their children born with the help of the traditional birth attendants, locally called Dai Ma. Dai ma is a person who helps babies to be delivered from mother’s womb, thereby she is also called mother – Dai ma. Dai ma provides the service free, as a service to humanity. They are often the poorer women living in the community and learning through their predecessors either their own mother-in-laws, grand ma. This is a shared knowledge and acquired through a practice of apprenticeship with experienced birth attendant. There is no fixed curriculum but the basic knowledge for safe delivery of babies and saving of lives of mother and baby is most crucial learning for them. Through their experience they get an idea about the reproductive functions of the women’s body. The healthcare delivery system has been developed for over half century but did not develop enough to provide necessary support to the mothers at the time when they need it most. So the role of Dai ma remained as crucial as ever, despite the fact that there have been efforts to ‘train’ various levels of rural ‘educated’ women, but it did not succeed to meet the need of the community of women. For the village women, Dai Mas remained the only support for child delivery.

It is in this context that UBINIG’s work with traditional birth attendants (Dai Ma) started and was integrated with the biodiversity-based agricultural production, Nayakrishi Andolon since 1990. With the support of DFATD of Candian government through Primate’s World Relief and Development Fund (PWRDF) UBINIG started the Maternal and new born child health project in 2012 with a new concept of organising the Dais in the villages in a “Dai ghor” (the house of the traditional birth attendants), where they are registered and take responsibility of pregnant women and children under five in the surrounding villages, usually 4 to five in number. In the Dai ghors, they provide advice on the basis of basic indicators of health such as weight, height, nutritional deficiencies and the requirement of referrals to the government health facilities. 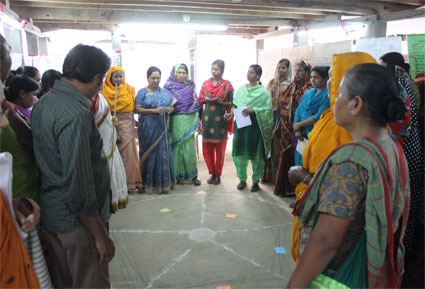 Using the tool 'wheel' : engaged and intense discussion is going on till a collective consensus is reached to make the programs successful.

The Dai ghors have been established at different times since 2012. So the experiences vary according to the length of the of time the Dai ghors have been in operation. The Dai ghors are also located in very different areas, some are in very remote char areas and also in coastal hill areas. Some dai ghors are established in indigenous communities. UBINIG from the beginning of the programme thought of replication in other areas, therefore involved members of a network of women-led organisations in Barisal, Jessore, Netrokona, Brahmanbaria and Kurigram. The representatives from these organisations have been invited in the Dai Ma conference and they also participated in an active way. The conference provided a space for all to be together and to share their experiences and the difficulties they are facing in carrying out the programme. It is not very easy to work with the traditional birth attendants in order to get recognition at the mainstream healthcare system. Moreover, the programme is addressing the health problems of women and children in poorer communities, who are dependent on government health services but are often deprived because of non-availability of health personnel or facilities at the nearby areas. For women’s reproductive health, the services are limited in government facilities, and are available at very high price in the private clinics. So Dai ghors have created options both for the poorer women and for the dais to receive and provide services in an organised way. 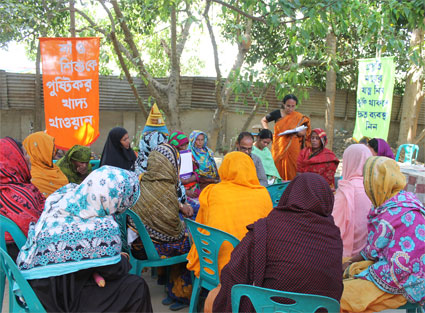 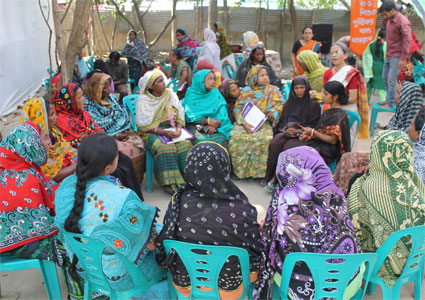 Group discussions under the shades of trees.

In the conference a participatory action tool, WHEEL was used to do the self-assessments of the different aspects of services provided by Dai ghors. These were i. services for new born and children under five; ii. training of Dais particularly about the risks of during pregnancies and necessary referrals, iii. nutrition advice for pregnant and lactating mothers, iv. check ups and care for pregnant mothers, and v. services such as weighing, blood pressure checking, use of ambulance, advice for referrals etc.

Participant Dais and the representative staff and Network members were divided into four groups to discuss and assess their performances till now. These groups were named as 1. Network members: (they are working independently but following the same principles of Dai ghor as UBINIG), 2. The first phase Dai ghors: (built during 2012), 3. the second phase Dai ghors: (built during first half of 2013), and 4. the third phase dai ghors: (built till December 2013). It shows that the experiences are varied and have different criteria of assessments.

They discussed and debated and finally scored on each kind of services provided by the Dai ghors. The Dais who could not write numbers as score, they used bean seeds. All the scores were collected and put on a WHEEL with five lines to indicate the services mentioned above. The debates were quite intensive and finally each group came up with a consensus on their common assessments. The WHEEL was drawn on the earthen floor in the exhibition hall of Akhrabari. Joynal and Sheuly helped Farida with the drawing on the floor using charcoal and blue pen.

There were four different drawings on the same wheel, having three points where the scores merged very closely. These were 1. check ups and care for pregnant mothers, 2. services such as weighing, blood pressure checking, use of ambulance, advice for referrals and 3. nutrition advice. All the participants stood around the WHEEL and explained why they felt this way and whether this reflected the reality of the Dai Ghors. The collective discussion again confirmed that they had consensus on these issues. On the issue of services for new born and children under 5, there were differences of opinions but in general they felt that they need to do more than what is being done at present in the Dai ghors. Regarding training, all four groups had four different scores. Interestingly, it was not a negative assessment rather it reflected that the Dais under different Dai ghors received different levels of trainings including first primary training, refresher training and the TOT trainings. All the Dai ghors represented at the conference did not get chance to all these for very practical reasons. But those who received the training were very happy and indicated high demand for receiving more and more information through different levels of training. Although the Dais are very experienced themselves, they are very keen to know about the complications that can be prevented and also want to know what they should do when they feel that they cannot handle the case anymore. They cannot see women suffering or dying in front of them. They do not want to see any new born dead or suffer from disabilities due to complications.

They are the Dai mas, they suffer as much as the mother. 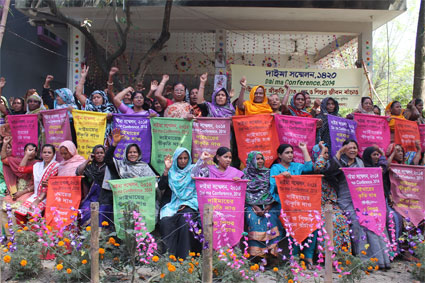