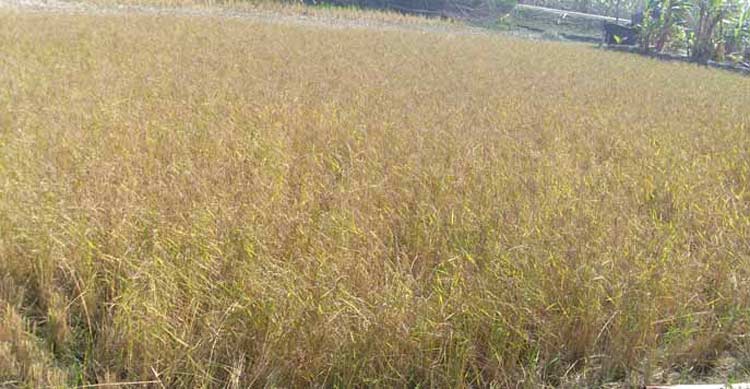 Rice growing areas at Zianagar upazila can be categorized into high and los lands. Low land areas occupy about 85 percent and high land about 15 percent. Local varieties of rice are grown in most of the land. Fine grain rice is grown in high lands. Remarkable fine grain rice varieties include Dudhkalam, Bethichikon, Banshful and Lakshmibilash. Low lands are grown with coarse grain rice like Kalamoti, Hargozal and Mathamota. The fine grain rice varieties in the high lands were at half mature stage when the SIDR stroke the area. Clay and sand due to submersion under tidal surge have impaired the natural color of rice. The yield of fine rice may be 15 – 20 percent less than normal due to the adverse impact of the SIDR.

The coarse grain rice in the low land was in panicle initiation stage to flowering stage. In some cases rice was there in the field at blooming stage. Rice at blooming stage was the most vulnerable and resulted sterile grain (chita). About 15 – 20 percent of coarse grains yield may be reduced due to the affect of SIDR.

The fine grain paddy varieties which were at flowering stage when the SIDR came on 15 November were the worst affected. The high-speed wind and tidal surge came together. The bold grain paddy in low lands was less affected because it was at pre-flowering stage at that time. This paddy will be harested from mid Poush (January). A good harvest is expected from the bold grain paddy. Fine grain paddy is at harvest stage (end December) (Report of Dr. M. A. Sobhan, Consultant UBINIG to Pirojpur and Barguna Districts during 18.12.2007 to 20.12.2007 for assessing the damage by the SIDR on 15.11.2007).

Boro rice crop in three blocks at Lauri village was visited and observed in May , 2008. High yielding varieties of boro rice including BR 29 and BR 28 and hybrids, Hira, Aloron and Sonar Bangla have been grown here. Boro rice was transplanted in the field in the Bangla month of Poush. All the varieties and hybrids have been affected by Bacterial Leaf Blight (BLB) disease in this field. Among them the rice hybrids have been affected most. BRRI dhan 29, 28 have relatively been less affected by the BLB disease. In some plots the crops of hybrid rice have been totally damaged by the attack of BLB. There will be no yield of rice in these plots. The concerned farmers are at a total loss of crops.

Standing boro rice crops of different farmers in the field at Lahuri were visited. Discussions were held with the farmers on the spot. Mohammad Jafar Ali Sheikh S/o Late Gahur Ali Sheikh, village: Uttar Lahuri mentioned that he ad planted hybrid, rice Hira on 68 decimals. He had transplanted rice seedlings in the Bangla month of early Magh. He further mentioned that the crop condition was good initially. But the Bacterial Leaf Blight disease started appearing just before flowering. By this time he had applied furadon, basuding and sevicol. But there was no improvement. The entire field has taken a burnt appearance. Most of the plants have no initiation of panicle. Those have emerged panicles but have sterile grains. Mr. Jafar mentioned that he had incurred a cost of Tk. 19,000 for raising the crop. But there will be no yield in this crop. So he is totally broken down for the loss of rice crop. Mr. Salam Sikder s/o late Asmat Ali Sikder mentioned that he had raised hybrid rice Hira on two Bighas and BR-29 on one bigha of land this year. It was observed on the ground that the plants in both the plots of Hira and BRRI dhan 29 were affected by Bactenal Leaf Blight disease. However, the intensity of infection was relatively less in case of BRRI dhan 29 compared with hybrid, Hira. The plots of hybrid rice, Aloron and Sonarbangla were also visited and observed in this field. These hybrids of rice were also badly infected by the BLB disease. Discussions were held with the farmers . All the farmers expressed their frustration for the loss of hybrid rice crops. They also expressed their annoyance on those who supplied the hybrid seeds. 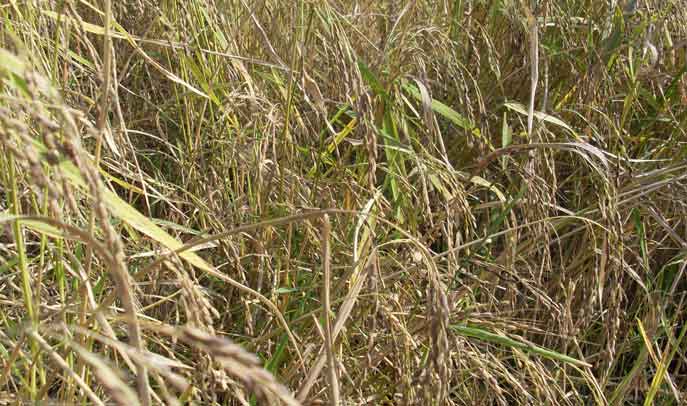 The farmers mentioned that they had followed all the instructions as offered by the officers of the Agriculture Extension Department for growing hybrid rice. “But now we do not find any of the concerned Agriculture officers at our reach when we are at a loss of our crops.” The farmers further mentioned that they had lost most of their assets in the terrible attack of the SIDR. Now they have again been exposed to a silent but a serious and heavy loss. They demanded compensation.

The farmers argued that they used to grow sweet gourd, ash gourd, kherai, marma, ridged gourd, Indian spinach after the harvest of Aman paddy in the rabi season. After the harvest of rabi crops they would grow Mala and other varieties of Aus rice in Kharif-1. But this year hybrid rice seed and fertilizers were given free of cost. As a result they had to give up their traditional crops and production practices. They were motivated for growing hybrid rice with which they were not at all acquainted. They just followed the instructions given by the Agriculture Offices. But now they have lost their crops and the means of livelihood and survival. So the farmers feel that the government is under obligation to compensate for the loss of hybrid rice crop (“Tour Report of Dr. M. A. Sobhan, Consultant UBINIG during 16-19 May 2008 to Pirojpur in connection with the SIDR rehabilitation program”).