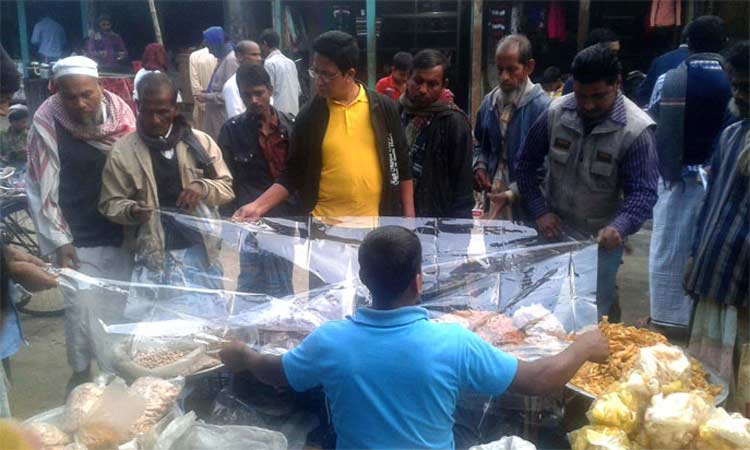 Delduar Upazila Parishad and UBINIG have been working together in collaboration with other stake holders for implementation of “Delduar Safe Food Upazila”. Awareness creation program for street food vendors is one of the activities of this program. Accordingly “Street Food Safety Week” was observed during 12-18 December 2015 with the involvement of the street food vendors. Advocacy campaigns on safe food production and marketing have been organized in the locality including hat, bazar and other public places. The Nayakrishi farmers from different villages in the Upazila actively participated through distribution of leaflets and cultural activities. Field level extension officers of Department of Agricultural Extension collaborated in raising awareness among the farmers on the adverse impact of the use of chemicals, pesticides and other external ingredients. For the vendors it was more of an issue of selling the food that has already been produiced and processed. But they could not ensure safety becayse food remained uncovered and thereby were contaminated. 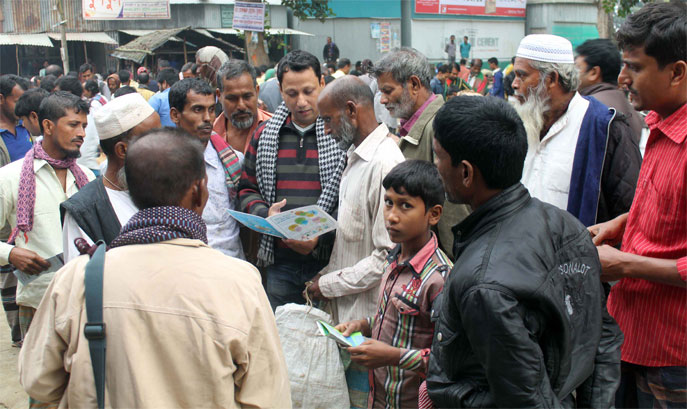 Lauhati hat is located in the center of Tatosree, Pachuria, Shalpanaru and Damkhando villages of Lawhati Union. These villages occupy vast area on the bank of Dhaleshwari river. Lauhati hat occupies about half a sq. Kilometer. Most of the people walk to the hat or come by boat. The local people buy and sell their own farm produce in the hat. In addition, some business men from outside deal in rice,wheat, pulses and mustard.

Fazilhati hat is located near the pucca road at Putiajani village, near the Union Council Campus.

The villagers of the adjacent areas buy and sell their farm produce in this hat. Inhabitants of Fazilhati, Putiajani, Mominnagar, Bishwanathpur, Charpara bring their crops for selling in this hat. Most of the people visit this hat on foot and others use C.N.G operated vehicles.

Delduar hat is close to the Upazila complex. The people from Madavcol, Pakulla, Jangalia, and Delduar areas buy and sell their crops in this hat. The street vendors sell prepared food items here. Most of the people walk to the hat. Some of them ride bicycle and C.N.G operated vehicles.

People from Mushuria, Nallapara, Goaria, Kandapara villages of Attia unio buy and sell their products in Nallapara hat. Some venders sell prepared food near the road side. Most of the people walk to the hat. Some of them take bicycle or C.N.G operated vehicles.

The selling of different prepared food items in the weekly markets in Delduar Upazila is discussed as follows: 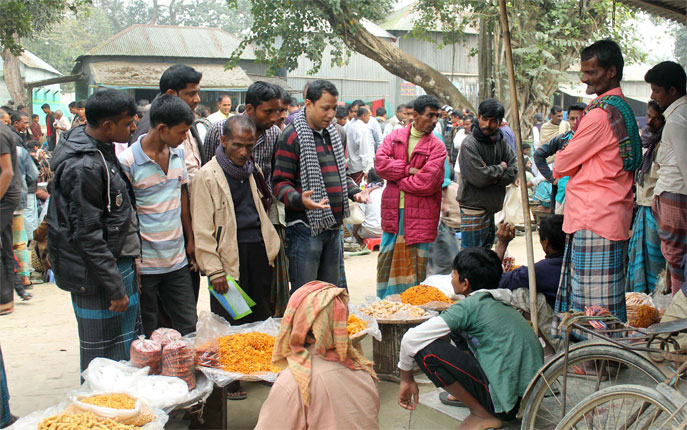 Generally the local people from nearby villages come in the market for buying and selling rice, wheat, pulses, vegetables, ducks and chickens. In some markets cows and goats are also traded. Side by side some poor people sell prepared food on tin container, tin dish, polythene, and big trays. Some of them cover these food items with paper or polythene. These foods are sold in densely populated places. Most of the foods are sold in open containers without any cover. Pyaju, Jilapi, ruti (bread), singara, and big chapri are prepared in the road sides. These foods are served with bare hands. The open foods are contaminated with dust and dirt carried with wind. Moreover there are swarms of flies on the open food items. 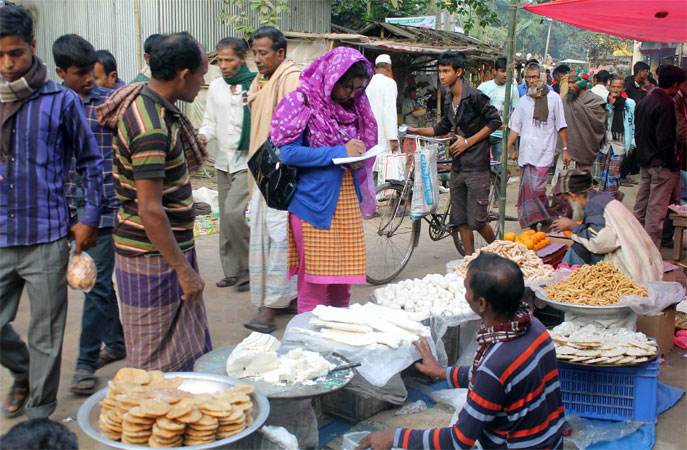 Type of the open food: 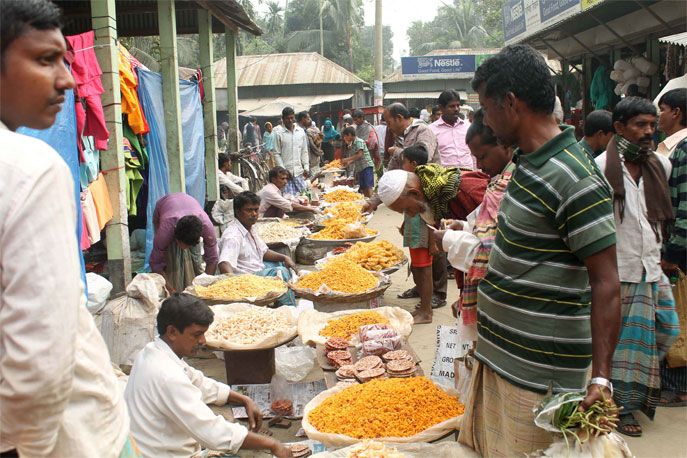 Majority of customers of these foods are the farmers visiting the market for buying and selling different products. In addition students, parents and members of other professions also buy the food items. Some of the customers are carrying the food home and others are eating in front of the shop. Especially the children, students, youth are eating fried chick pea, fuska, singara, pyaju and jilapi in front of the shops. The farmers, coming to market for selling crops, eat ruti, dal, chapri, labra and fried egg. 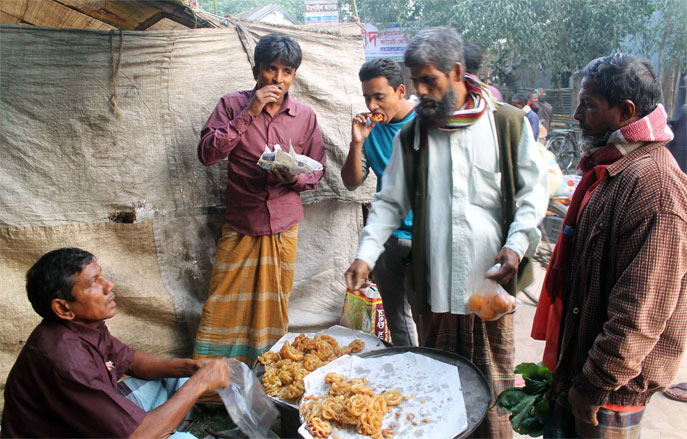 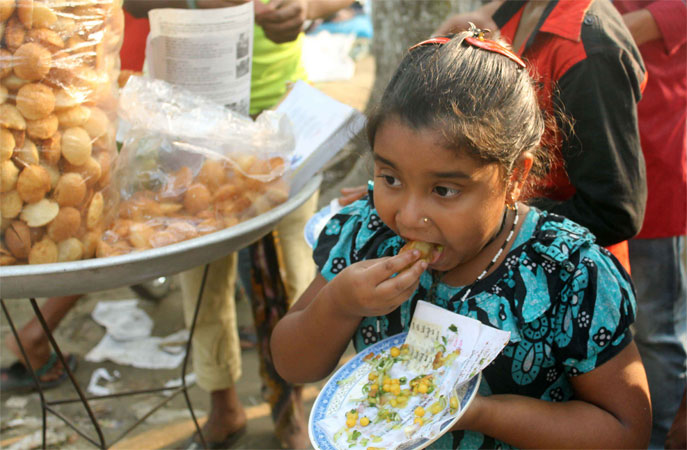 The vendors are serving the food items with bare hands. The food items are continuously contaminated with dust and dirt as because the shops are located near the main road. The same un-cleaned hands are used for marking different food item and at the same time for putting fire wood in chula. Glass and plate are washed in the same dirty water. 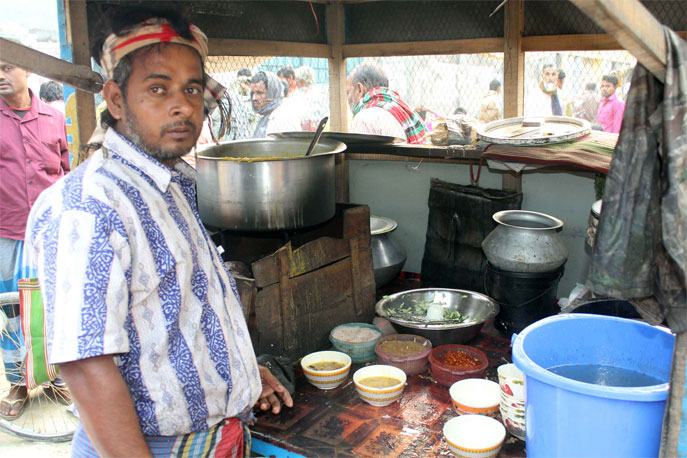 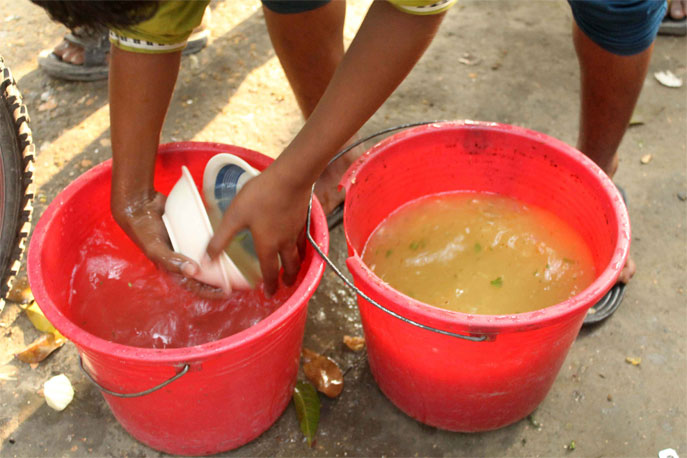 The dried foods are sold in paper packets, polythene packets, polythene bag, etc. Fuska is served on un-clean plates. Plates are washed in used water. The same bucket of water is used for washing from morning to evening. Curd contaminated with dust and dirt is served in un-cleaned plates. 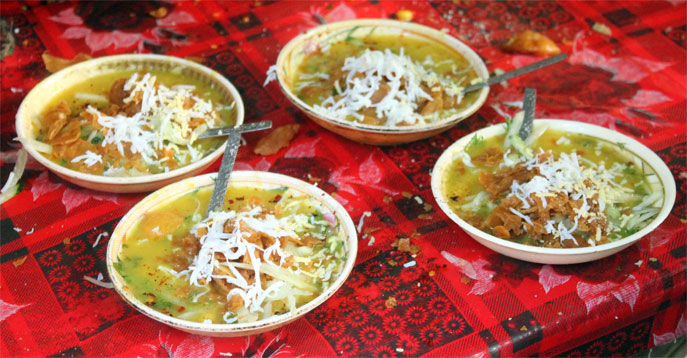 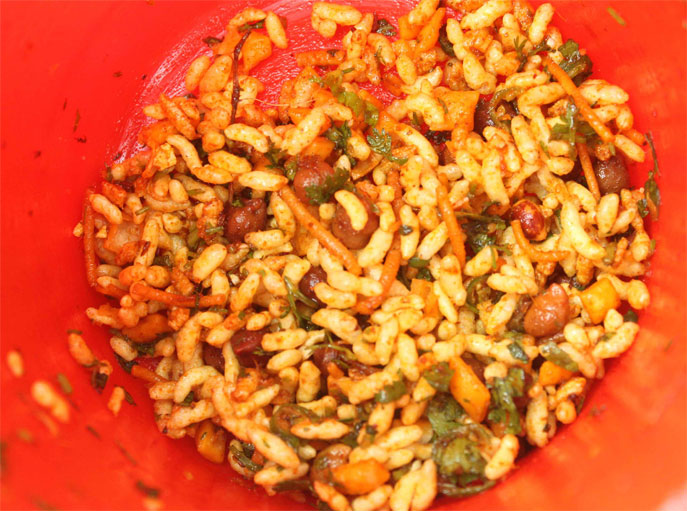 Discussion with street Food Vendors and the merchant society leaders

Discussion was held with the Street Food Vendors in five hats and the Merchant Society of Nallapara bazar regarding food safety and cleanliness. Secretary of the Merchant Society, general members, Nayakrishi farmers, street food vendors, Jahangir Alam jony, UBINIG; Rabiul Islam Chunnu, Coordinator, UBINIG, Tangail and other staff members of UBINIG were present in the meeting. A. Quddus, General Secretary, Merchant Society mentioned that creation of public awareness for food safety was very important. He assured: “We shall ensure that food is prepared and served in hygienic environment”. The joint endeavor of UBINIG, Delduar Upazila Parishad and the Bangladesh Food Safety Network with support of FAO for declaring Delduar a safe food Upazila is a noble venture. It is an eye opener effort for ensuring safe food for the people. The street food vendors will be encouraged to make safe food, keep food in hygienic condition and serve in clean containers.

At the end the discussion the members of the committee and the Nayakrishi farmers visited the market. Essential items for covering food were distributed among 40 street food vendors in five markets.

Significant positive response was received from both the buyers and sellers in favor of safe food, especially street food in course of the observance of “Street Food Week”. Everybody was sincere for ensuring safe food and cleanliness. The consumers mentioned, “you have taken a good approach for creation of public awareness for safe food”. However there is more need of activities on a holistic program from production to consumption of food, ensuring safety and nutrition. Strong and bold steps are urged for resisting the act of poisoning food with formalin and such other harmful chemicals. It was observed that some vendors were busy covering food items when the open food items were photographed. It was revealed from discussion with some of the shop owners that they were aware of the need for food safety and cleanliness but they are constrained for lack of sufficient capital.

The street food vendors were very happy to receive the items to cover food. They also appreciated the discussion meeting dedicated for maintaining street food safety as organized by Delduar Upazila Parishad and UBINIG. Such coordinated effort in wider scale is needed with a view to ensuring access to safe food for the people.