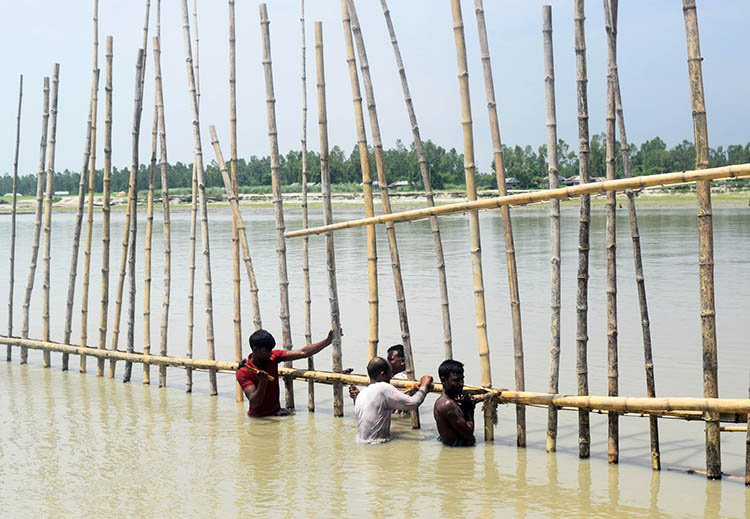 In addition to the normal and abnormal floods, many char areas suffer from river bank erosion. The flat delta lands of Bangladesh offer little resistance to the hydraulic forces of its rivers, particularly during periods of high flow. As a consequence, in many regions rivers such as the Jamuna run wide rather than deep: easily 10 km wide at places during high water, yet rarely in channels with sides deeper than two or three meters.

At least five million people in 20% of Bangladesh’s Upazilla (local administrative regions) are at risk of losing land—home and village—from riverbank erosion at any one time. Among them, at least 100,000 are forcibly displaced each year. An unknown but probably comparable number ‘voluntarily’ shift residence to try to make use of newly accreted land.

UBINIG has been working in the area of Shahzadpur, an Upazilla in Sirajganj district on the bank of Jamuna river. The farmers practicing Nayakrishi have experienced river erosion over the years.

Sreepur and Dhitpur are two villages of Sonatoni union on the middle of a char of the Jamuna river. Crop production, cow, goat, chicken and duck rearing are the main source of their income. The inhabitants have to struggle constantly for survival with natural calamities, river erosion and flood. They survive with great hardship after losses of cattle, goat, duck, chicken, standing crops in the field due the devastation of flood. They again start agricultural production after recession of the flood. They work together for selecting crops in order to cope with flood in future. However, they are vulnerable to river erosion. Crop fields, dwelling houses and other belongings are washed away but they are undone.

In the River erosion area of Sirajganj farmers know that river bank erosion will happen on one side and land accretion on the other side. They planned the crops and households accordingly. But over the years the causes of river erosion are now more complex including natural, manmade and climate change. Soil has degraded to more sandy soils not suitable for rice crops, leading to food insecurity in the area. Crop pattern has changed from rice to vegetables and pulses. With sandy soils they are growing peanuts. Livestock keeping has become a source of bringing cash for reconstruction of lost/damaged houses due to erosion. So they do not get the benefit of livestock keeping as an important livelihood option. 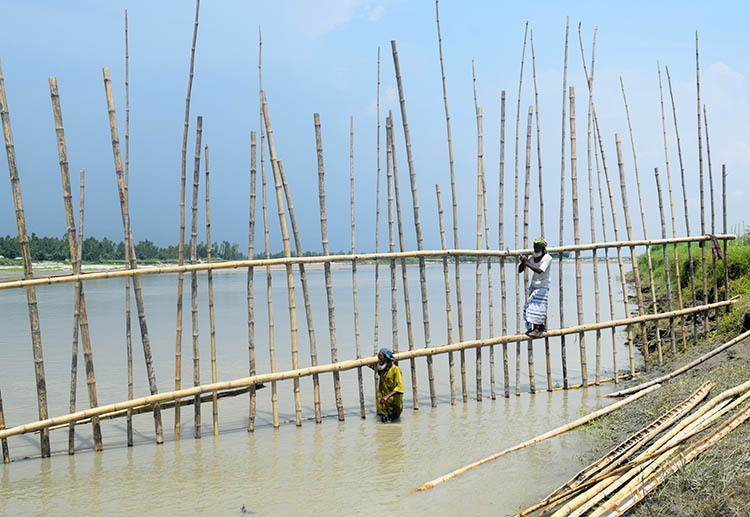 People in Sonatoni and Ghorjan union of Sirajganj district have been living on the bank of Jamuna River and facing continuous threat of river erosion causing cultivable land and household disappearing. Chatka (the Bamboo binding) is an innovation of the people in the community and an initiative of Nayakrishi farmers. Joint efforts of UBINIG and Nayakrishi farmers and the Ghorjan community under the Community-based Biodiversity Management Project, bamboo bindings were constructed in 2010 which not only resisted land erosion, but also helped accretion of 73.48 hectares of land. The farmers have now diversified options mixed cropping, cultivation of local varieties of crops, increasing the number of crops and breeds of poultry birds and domestic animals.

From then onwards, the farmers continuously planned to constructing Chatkas as part of resisting river erosion as it saved land from erosion. The community got involved with their own labor and wisdom and helped save their cropping land and houses from river erosion. Now it has become part of the current project on “Reducing Climate Change Vulnerabilities by Promoting Local Knowledge” supported by PWRDF-MCIC since 2016. This is the Year 2 report on the situation of the people in the river erosion area.

The role of Chatka is evident from the existence of raised up char land, crop fields and the condition of the village. The course of river has been diverted due to the construction of the Chatka. Heavy deposition of siltation has taken place creating easy landing ground on the bank of the river. Water flows over this land in rainy season. Silt comes with the flowing water adding strength and length to the newly accreted char land. Crop fields, dwelling houses of the farmers, school, market and other infrastructures have been saved due to experience and proper planning for the construction of the Chatka. 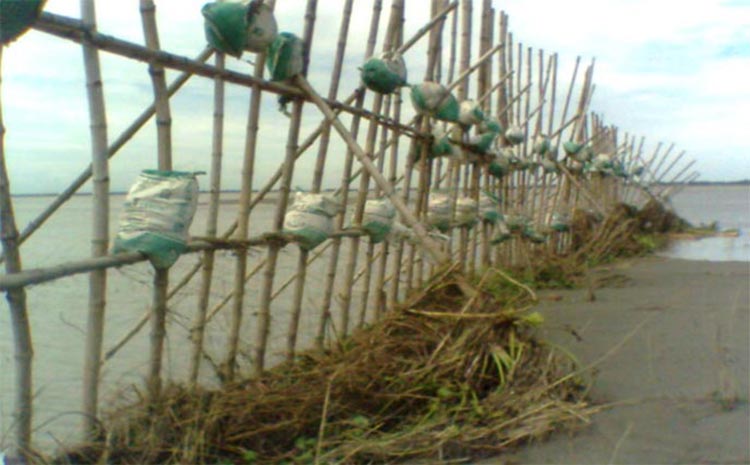 Cause of land erosion and present condition

The river flows in zigzag fashion. Almost every year the river changes its course. The depth of river also varies due to its change of course. In Jaista and Ashar (mid May – mid July), there is rise of water in the river. In the deeper place in the river there is heavy rolling of water and consequently there is erosion of land nearby. The higher the depth of the river, the greater is the erosion of land nearby. Land erosion has started in some place where the depth of the river is high at Sreepur, Baliadanga, and Sonatoni. Land erosion has not yet started at Bantiar market and village where Chatka was constructed last year. Water has been flowing through the newly accreted char land. However, the high land areas are still above water. There is muddy water in the river. There is siltation in the new char land. The more the muddy water the more is the siltation.

Chatka in year 2 was established near the Chatka constructed in year 1. Dense planting of Karcha grass was made in the year 1 char land for soil binding and compaction so that the land is saved from the flood in year 2.

A primary meeting was organized involving farmers, school teachers, students, union parishad members and the market committee members before constructing the year 2 Chatka. Present condition of river, nature of flooding and the stability of the Chatka of the year 1 were discussed in the meeting. The objectives of constructing the Chatka were set in such a way so that a large area of char land is accreted in order to saving the High School, Primary School and Bantiar market. The location for construction of the Chatka was selected after threadbare discussion is the group. It was decided to construct four Chatka near char land accreted after year 1 Chatka. The flow of river current presently passing near the Baliakandi village will be closed as a result the upcoming char land will join with year 1 char land. Consequently the area of cultivable land will be increased. Bantior market, High School and Government primary School will be saved. This year about 50-60 acres of char land has accreted. 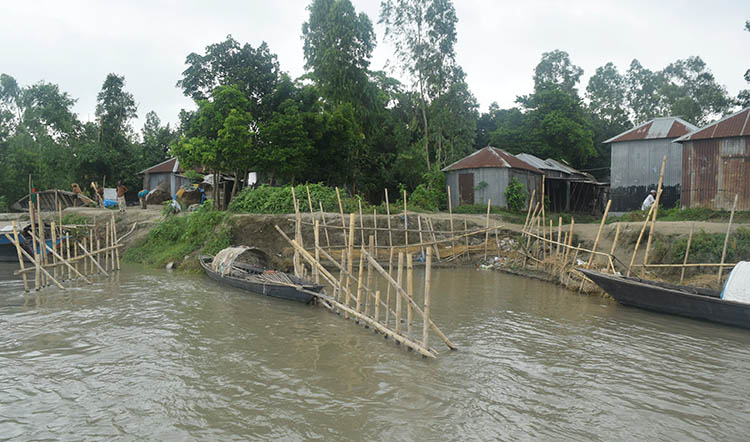 Selection of location for construction of Chatka

Materials for construction of Chatka

What would have happened if there were no Chatka: The benefits of Chatka

There could be severer land erosion due to heavy flow of flood water in the course of the river which was initiated in the Sonatoni char land. There was no way to check the flow of river current. Many crop fields, dwelling houses, school, market, etc would have been washed away in the current of river water in Sreepur, Bantiar, Baliakandi and Ghorjan villages.

People of Bantiar, Baliakandi, Dhitpure, Chamtara and other villages had to take shelter in other char lands last year caused by land erosion due to flow of river. Part of Bantiar, market, the center of economic activity was also eroded.

Many farmers would be dependent on others for food and lodge. They would not have the space to rear poultry birds, cow and goat. School children would have to drop out from classes. Market places would have been disrupted. The farmers would not get that facility from a market in a distant place which they have been enjoying from a nearby market. There are many small shop keepers who do not have any cultivable land and totally dependent on the shop. They would become helpless due to erosion of the shop in the river. There are some street food vendors who earn their living by selling food in the market. Their business would be stopped and be pushed out of profession. The farmers work in the field at day time. In the evening, they go to the market not only for buying and selling but also to meet friends, relations and recreation. The entire fabric of social life of the people would be wrecked by land erosion due to flow of river.

About 50-60 acres of land has accreted due to construction of Chatka. Further siltation has taken place on the land accreted last year. The farmers had grown korcha grass based on heavy siltation. Further siltation was intensified due to the flow of muddy water and the presence of karcha grass. Thus the length and width of the char land was increased.

Bantiar, Ghorjan part of Sreepur and Baliakandi villages were saved. About 80 acres of land of three villages’ would be eroded due to flow of river in the rainy season. These lands were saved due to construction of Chatka.

1325 people in 265 families in four villages were saved from land erosion due to flow of river. Rice, sesame, millet, ground nut, black gram, mustard, wheat and barley are cultivated in the land saved in the four villages.

Chatka is a farmer’s innovation and practically proven technology. A prior planning and design are needed taking into account the course of river, the point where the flow of river may hit and erode, how much force the Chatka can resist, where the Chatka can sustain in the river and the subsequent siltation will take place.

The experienced farmers have clear idea for planning and implementation of activities for construction of Chatka for saving human habitation, crop fields, and varieties of crops, cattle, poultry and other assets.