It is past time to commit, here and now, to achieving Real Zero, through real reductions and real solutions, rapidly and permanently. We don’t want any more of your far-off and empty Net Zero pledges.

We don’t want to read about your promises to supposedly balance the emissions budget by mid-century, using techno-fixes, geoengineering, carbon markets, and accounting tricks. We want to know what you are doing today to eliminate the major sources of emissions — fossil fuel production and use, deforestation, and industrial agriculture — which are not only warming the planet, but also poisoning frontline and fenceline communities and polluting our collective environment. And we want to know what you will do from now on, tomorrow, and every year to come, to strengthen resilience, center justice, and support communities in a just and equitable transition to a fossil-free future that secures human rights, livelihoods, work, and a safe, clean, healthy, and sustainable environment for present and future generations.

We demand that you put forward real plans to bring emissions and fossil fuel production down to Real Zero. These plans must be based on real transformation, backed by real resources, and implemented with the real urgency demanded by the current crises.

• Show us how your actions will rapidly cut emissions at source, on a near-term timeline consistent with science and equity, sufficient to keep global warming below 1.5°C, without relying on illusory carbon dioxide removal or other geoengineering technologies that endanger frontline communities or making harmful assumptions about natural sinks.

• Show us how you will phase out fossil fuels, industrial agriculture, industrial food systems, plastics, and other polluting industries, and invest in their replacements as needed to transform our energy, food, transport, and industrial systems.

• Show us that you recognize that there is no future for fossil fuels in a climate-safe world by prohibiting new fossil fuel production and infrastructure, protecting decision-making from fossil fuel industry lobbyists, banning fossil fuel advertising, and ensuring an equitable and managed phase-out of all oil, gas, and coal, in which polluters pay to properly close down and clean up the toxic legacy of the fossil fuel industry.

• Show us how you will protect and restore biodiverse ecosystems — not for the carbon they contain to be traded as so-called “nature-based solutions” in offset markets, but because they are the basis of lives and livelihoods and because we must halt biodiversity loss and ecosystem collapse.

• Show us your plans to ensure real food security and food sovereignty in the face of climate threats, including by promoting peasant agroecology and local food systems.

• Show us how you will support proven alternatives and practices pioneered by smallholder farmers, women, Indigenous Peoples, and local communities, and respect and protect their rights.

• Show us what actions you will take to hold the corporations that have generated the majority of historical global emissions accountable and liable for the harm they cause. Rather than voluntary approaches, real accountability requires legally binding measures, including a global treaty on business and human rights.

• Show us you understand that today’s dominant growth-centered economic and development models are defunct and that you will foster new models that treasure sufficiency, well-being, and limits to consumption and growth.

• Show us how the countries most responsible for the historic and cumulative emissions heating our planet will do their equitable, fair share by undertaking the most rapid reductions to Real Zero emissions and providing financial support to lower-income nations.

• Show us that you will provide your fair share of real, adequate, and additional climate finance that meets the scale of the climate crisis and supports mitigation, adaptation, and loss and damage — not through loans that plunge countries deeper into debt or the trickle-down of coins from speculative carbon markets.

The only way to avoid climate catastrophe is to undertake these kinds of deep, systemic, and just transformations of our energy, food, transport, and industrial systems. But Net Zero targets are not a strategy for change. Net Zero targets are being used as a cover-up for business-as-usual.

As many statements and reports have laid bare, Net Zero emissions targets disguise climate inaction and distract from the necessary and urgent work of phasing out fossil fuels at source and localizing sustainable food systems and economies. Polluters’ Net Zero schemes are based on multiple myths and are little more than public relations campaigns. They blithely rely on assumptions that carbon offsets, tree plantations, bioenergy, and dangerous distractions such as hydrogen and carbon capture and storage will somehow keep or take emissions out of the air after polluters have done their damage. Unproven technologies that have repeatedly failed, have yet to be realized, and remain non-viable at scale are being imagined as supposed solutions for continued emissions. From carbon capture and storage to direct air capture to burning plastic waste for fuel, these technologies extend and deepen the fossil economy that drives the climate crisis while imposing profound new risks on frontline communities around the world.

Governments and industries are using the “net” in Net Zero to avoid responsibility for past, present, and future emissions and create a false sense of climate progress. These Net Zero plans are premised on the notion of canceling out emissions in the atmosphere rather than eliminating their causes. Instead, “Net Zero by 2050” simply means a pledge that in 30 years’ time, governments will offset that year’s pollution — with no guarantee they will substantially cut emissions in the decades preceding. Mid-century Net Zero pledges do not keep temperature rise below 1.5°C.

Frontline and Global South communities did not create the climate crisis but are facing its worst impacts. These same communities will bear the burden of the land grabs, displacement, food insecurity, environmental contamination, and intergenerational injustice that will result from attempts to compensate for big polluters’ business-as-usual operations, replicating old patterns of carbon colonialism. By prolonging the operation of polluting industries, false climate fixes concentrate emissions in marginalized communities and exacerbate the environmental and health harms borne most acutely by those on the fencelines.

As distant Net Zero targets shift the focus to the future, they obscure the responsibilities of those who created the climate crisis in the first place and who are doing too little to address it now. Moreover, in “the big con” that is Net Zero, future emissions are made invisible as well, hiding the continued and increasing emissions from fossil fuel production, plastics production, and agroindustry in a “net” that is rife with loopholes. These Net Zero plans detract from real plans and solutions towards zero emissions that can immediately, truly, and justly address the crisis we face.

Climate leadership will not be measured decades from now, but rather by the pace and scale of concrete, near-term actions taken today to phase out fossil fuels, land-grabbing industrial agriculture, and other polluting industries. “Systems change, not climate change” requires decreasing overconsumption by the Northern and Southern elite while ramping up investment in truly just and clean renewable energy sources, community-based sustainable food systems, and livelihoods. We do not lack real and necessary solutions — only the political will to enact them. To address the current climate emergency, we need real plans, real solutions, real finance, and Real Zero for an urgent just transition. NOW. 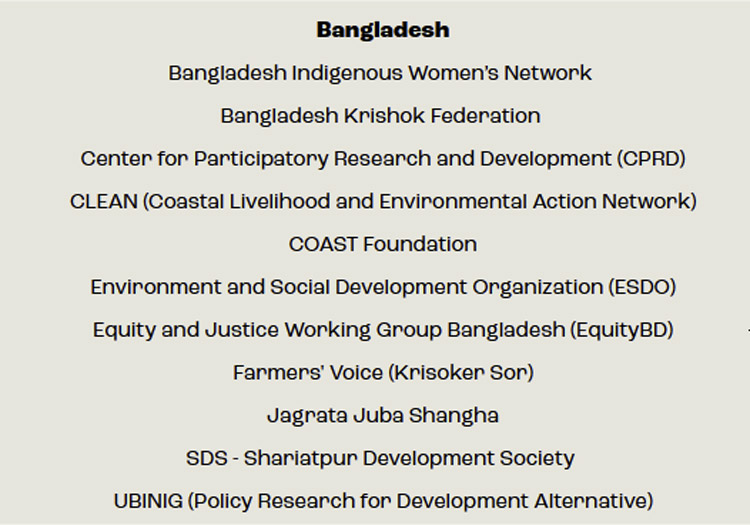