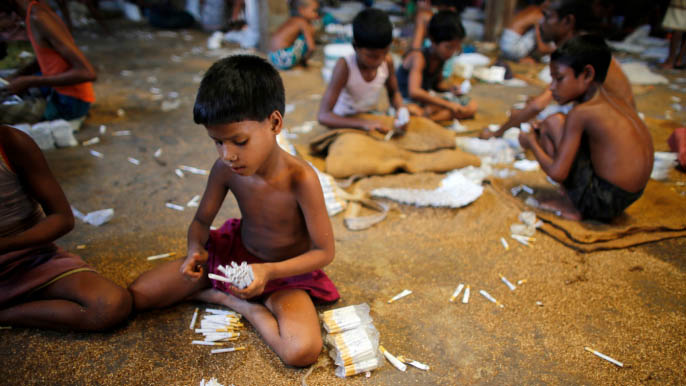 The ninth Conference of the Parties (COP9) of the WHO FCTC (World Health Organisation Framework Convention on Tobacco Control) started with the message that 'the tobacco epidemic has not gone away,' despite worldwide efforts to control its production and consumption. The 182 Parties to the WHO Framework Convention on Tobacco Control (WHO FCTC) virtually gathered from 8 to 13 November 2021.

This was the first time such a virtual conference was organised amid the Covid-19 pandemic. The COP9 took place parallel to another very important Conference of the Parties on Climate Change (COP26) in Glasgow, where over 25,000 delegates including government and non-government organisations have gathered in person.

The participation of Bangladesh is not as visible in COP9 as it is in COP26. Nevertheless, the tobacco epidemic and climate change are both manmade disasters.

One affects human health directly and the other jeopardises the very existence of life on the planet. They could only be solved if the human species are collectively committed to resolving the mess they have created.

For that, we need to change the way we address our health, our planet and reimagine socio-economic relations, the industrial basis of civilization and the unilateral power of the industrial countries.

Both climate change and the tobacco epidemic are caused by the actions of the industries that earn huge profits from the production, commerce and consumption of their goods and services. The urban industrial lifestyle, addictive nicotine culture, an industrialised food production process and dependence on fossil fuels are just some of the world's major problems.

Tobacco in all forms, smoking and smokeless, is injurious to health, killing over 8 million people worldwide each year, according to a WHO report (July 2021). Among them, more than 7 million deaths are caused by direct tobacco use while over 1 million non-smokers are being exposed to second-hand smoke. It is a 'slow-moving pandemic' (as termed by the WHO) imposing more than US$ 1.4 trillion health and economic costs and lost productivity.

While the governments are now struggling hard to curb Covid-19 pandemic, tobacco poses a greater threat as its usage increases the severity of disease and likelihood of death in hospitalised Covid-19 patients. The entire world is now fighting against the Covid-19 virus and trying to contain its spread through vaccines.

The industry continues to generate vast profits from making people dependent on its products, now produced in various forms and shapes, according to the news released on 1 November, before the COP9 took place.

The Global Tobacco Industry Interference Index 2021 published by STOP in November this year documented the status of government efforts in implementing the World Health Organisation (WHO) Framework Convention on Tobacco Control (FCTC) Article 5.3, which outlines 'how governments can protect public health policies from commercial and other vested interest of the Tobacco Industry (TI) and those who further its interests.'

Governments, who are Party to the FCTC, are obliged to follow the Guidelines of Article 5.3 to safeguard their tobacco control efforts and protect the health of their people. As mentioned earlier, this was even more necessary during the pandemic as tobacco poses more risk to Covid-19 patients.

Bangladesh is one of the first countries to sign the FCTC in 2004 and has passed national tobacco control law in 2005. In that regard, the tobacco industry continues to be a barrier to the fulfilment of the government's commitment.

The tobacco companies have used the pandemic situation to their advantage by lobbying the governments in different countries to consider cigarettes as 'essential' products.

The Global Tobacco Industry Interference Index 2021 reported that in Bangladesh, the Ministry of Industries granted special permissions to both BAT and Japan Tobacco International (JTI) in April 2020 to continue manufacturing, purchasing leaf, supplying finished goods and distributing them, even during the nationwide Covid-19 shutdown.

The request to withdraw such special permissions from the Ministry of Health and Family Welfare was turned down, despite letters from tobacco control groups supporting such a withdrawal. Tobacco products, cigarettes, e-cigarettes were home-delivered during the lockdown.

Another strategy of the tobacco industry is to boost its image and reputation through receiving awards that conflict with Article 5.3 guidelines of FCTC. Bangladesh, Egypt, Korea, the Philippines and Turkey are among the countries where the governments gave awards to the tobacco industry for various purposes.

In Bangladesh, the Finance Minister/Chairman of the National Board of Revenue has awarded British American Tobacco as one of the top tax-paying companies.

The government of Bangladesh formulated the President's Industrial Development Award Guidelines 2020 to award industrial units under six categories — large, medium, small, micro, cottage and hi-tech industries. Later, on 9 February, 2021, the Ministry of Industries decided on the eligibility criteria and stated that any industry producing tobacco or tobacco-related products could not receive such an award.

However, to everyone's surprise, this year, British American Tobacco Bangladesh (BATB) jointly secured the first prize in the large industries category. Twenty-nine tobacco control groups have demanded the withdrawal of the award.

Most decisions of the COP9, being virtual this time, are being deferred to the COP10. At the COP9 sessions, Parties revealed that the TI interventions during the Covid-19 pandemic have definitely affected treaty implementations while millions suffered and died.

However, tobacco control advocates see opportunities despite the current challenges.

The opportunities include tobacco control during pandemic recovery, increased tobacco taxes and the use of the additional revenue from tobacco taxes to fund improvements to the health system, including better tobacco control and measures to deal with tobacco industry interference and misinformation coming from the industry, including the banning of the so-called corporate social responsibility activities (COP9 Bulletin, 11 November, 2021, FCA).

(Originally published as 'In the tobacco epidemic, the ‘virus’ is the tobacco industry' in The Business Standard (TBS) on 17 November 2021.)