A violence of modern agriculture 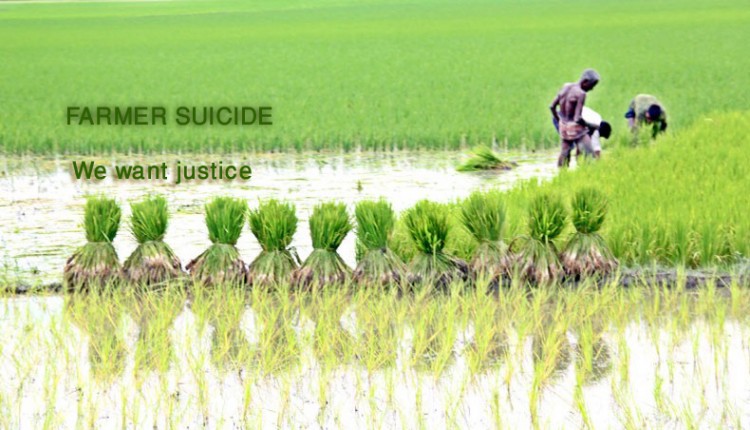 TWO young farmers, Abhinath Marandi, 30, and Rabi Marandi, 27, at Godagari, Rajshahi committed suicide by taking poison (pesticide) near a Barind Multipurpose Development Authority deep tube well project at Iswaripur on March 23 as the tube well operator, Sakhawat, refused to irrigate their paddy fields. They were cousins and belonged to the Santal community. This incident has a clear connection with the supply of irrigation water that they were refused to be given. So this is not just an ‘emotional’ outbreak between the two brothers. ‘Maner dukkhe bish kheyechhi’ (took the poison out of grief), Abhinath told his brother before his death. This is also not an isolated incident, but a continuation of the long deprivation of the small scale farmers all over the country practising modern agriculture.

Abhinath and Rabi were worried because their paddy fields were dried up, as there was no rain. Rozina, Abhinath’s wife stated to the probe committee members that he visited Barind Multipurpose Development Authority deep tube well operator for over 10–12 days to irrigate his paddy field, but the operator did not pay any heed to his plea. The newspaper reports mentioned that they expressed their frustrations to the machine operator, and threatened to commit suicide. And they meant it. The probe committee formed by the ministry of agriculture is investigating this suicide case and is expected to give the report in a week. But is that enough? Is it only the fault of a deep tube well operator or does the problem lie much deeper to the extent that it can be termed as murder, not a suicide? 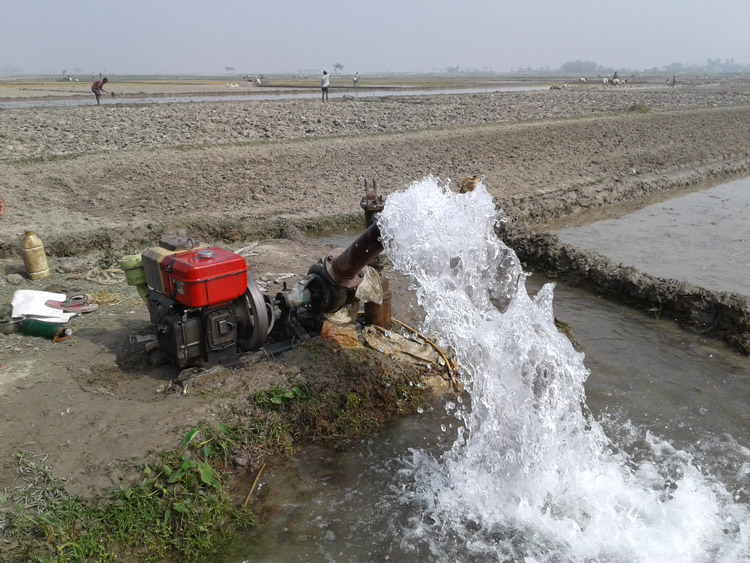 The Barind region, covering Rajshahi and Rangpur division, is usually drier than other parts of the country. The peculiar climate of the region encounters more extreme temperature variations (ranging from 45 degrees Celsius down to 5 degrees Celsius). Rainfall is less than the country average.

So the crops are also different. The cultivation of boro paddy has been introduced in this region through the BMDA to increase food production. But boro paddy, cultivated under modern agriculture methods, requires the use of irrigation along with fertiliser and pesticides; the cost of production has been increasing as the irrigation water is becoming scarcer because of the lowering of groundwater level. In terms of the agro-ecological zones, boro is a suitable crop for the haor and low-lying regions in the flood plain zones; where they do not require much irrigation with the deep tube wells. The drought-prone Barind region is not at all suitable for this crop.

Such suicide has not happened for the first time. Farmer suicide has occurred in the same upazila much before. In 2018 farmer Shyamal committed suicide due to the inability to meet the soaring debts and low price of the agricultural produce. In the same year, another farmer in Jhenaidah committed suicide for similar causes. So something is wrong with the system of crop production that is cash cost and input-based. While the cost of production is increasing, the price of crops is often unstable and they do not get a fair price to be able to meet the production cost and their survival needs. Farmers remain in debt.

The need for irrigation for boro paddy production is of particular concern here. Despite the unfavourable climate conditions the Barind Integrated Area Development Project under Bangladesh Agriculture Development Corporation was created in 1985 with the objective of creating irrigation facilities through the installation of deep tube wells. A separate autonomous authority named Barind Multipurpose Development Authority was created under the ministry of agriculture in 1992. The BMDA utilised the unused deep tube wells of the Bangladesh Water Development Board and extended the project activities in the Rangpur division as well.

From the beginning, providing irrigation water in the drought-prone water-stressed Barind area has been the main challenge. According to BMDA sources, boro paddy is being cultivated on 41,500 hectares of land under the Rajshahi Barind Development Authority under 2,626 deep tube wells. It is charging Tk 115 per hour for one cusec of water and Tk 125 per two cusec motor for the use of electricity from a deep tube well. The farmers of different upazillas including Godagari reported about paying higher prices — Tk 1,600 to Tk 3,000 — per bigha for the irrigation water.

The operators of the deep tube wells play an important role in the installation of the tube wells in respective villages, so they can exercise power over the farmers who want to get the irrigation water. There are allegations of discrimination to small scale farmers; they complained ‘local influential can get water by sitting at home, while the poor farmers have to request many times even after paying the price of the water through the pre-paid meters’.

The question also needs to be addressed why there is so much emphasis on boro rice cultivation which accounts for 53.8 per cent; followed by aman rice, 38.6 per cent; and aus rice, 7.6 per cent of rice production, according to estimates in 2018–19. The introduction of cultivation of boro rice in drought-prone region is now causing disasters in the lives of the farmers. Boro is one of the main ‘modern agriculture’ varieties developed as modern high-yielding variety IR-8 in the 1960s. At present the most common boro rice varieties are BRRI 28 and BRRI 29 which have been developed by Bangladesh Rice Research Institute since 1973. Hybrid rice varieties are also promoted by private seed companies as well as BRRI, which means more dependence on inputs. Boro, the dry-season irrigated rice is planted during the Rabi crop season (from December to early February and harvested between April and June), conflicting with the winter crops of lentils, mustard, and many other cash crops. Earlier, boro was grown in very low-lying areas with residual water from the wet season such as haors and irrigated manually using surface water in times of water shortage.

Let us not reduce the tragic incident of suicide to a result of conflict over water between the two brothers (Abhinath and Rabi) and the deep tube well operator. If that was the case, then it could have been solved much easily by removing the cruel operator. But the problems lie much deeper. It is a systemic violence of the modern input-based cultivation requiring fertilisers, pesticides-seeds and irrigation which runs with diesel. In a newspaper report, almost a month before the incident, farmers were worried for the increased cost of farm inputs, including irrigation, diesel, fertiliser, pesticides and labour. The increase of diesel price by Tk 15 per litre has resulted in at least Tk 1,000 additional cost of irrigation per acre of land, which was Tk 2,000. They also need tilling cost which also depends on diesel.

Another concern related to dry season boro rice cultivation is that it causes severe groundwater depletion. The high elevation of Barind is flood free so the only source of recharging is the rainfall, but that is also the lowest in the country. Among different upazilas in Rajshahi, Godagari and Tanore are very critical, in Godagari minimum depth depleted 17m and in Tanore 8.1m from 2000 to 2013. According to a study titled ‘Groundwater Depletion with Expansion of Irrigation in Barind Tract: A Case Study of Rajshahi District of Bangladesh’ published in the International Journal of Geology, Agriculture and Environmental Sciences, the situation was predicted to be alarming and lost suitability for boro production. Did the BMDA or the ministry of agriculture ever enquire about the situation and help farmers to grow other crops which are less dependent on irrigation?

So it is the ambitious and unpractical goals of modern agriculture which creates the conflicts that lead to violence, suicides, deprivations and hardships of the marginal farmers. The case of Abhinath and Rabi is even more sensitive because they belong to the Adivasi community and are often discriminated against.

Abhinath and Rabi have given their lives; others are half-dead with huge debt. These farmers need support and to be compensated for the loss they are incurring due to groundwater depletion and the increasing cost of production. The modern agricultural system is creating the violence against the farmers.