Just Transition in an unjust world 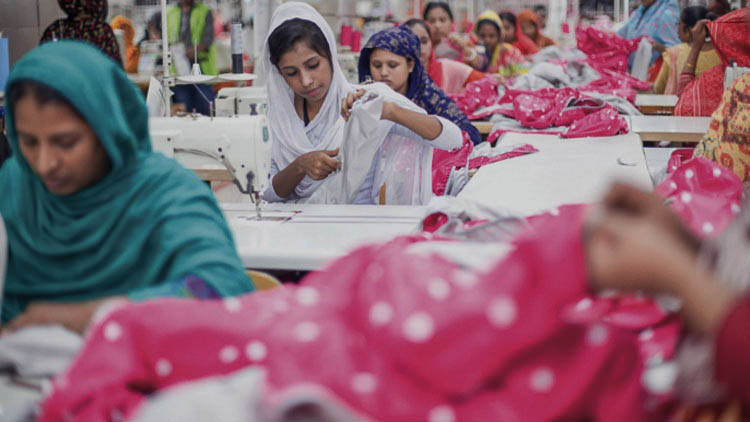 The new apocalyptic term has recently made its way from labour rights to climate change policy discussions. Now the question is, how much attention are we paying it in Bangladesh?

"Just Transition" is a visionary coinage that unifies a local set of principles, processes and practices.

It shifts economic and political agency and power from an extractive and wasteful economy to self-regenerative eco-social bodies that are capable of remaining related to each other.

It constitutes a truly global community of lively exchange and prosperity. It is visionary because it imagines a post-imperial, post-capitalist and post-industrial world that is not wasteful, destructive, exploitative or unjust.

It starts at the present level of production and consumption cycles to make it holistic and waste-free. The transition itself must be just and equitable, remedying past harms and creating new relationships of power for the future through reparations. If the process of transition is not just, the outcome will never be. Therefore 'Just Transition' foregrounds both where we are going and how we could get there.

This new apocalyptic term has recently made its way from labour rights to climate change policy discussions. It seems to be limited to the relevant stakeholders, but the issue is not simple and it affects more than a few.

The beginning and Bangladesh

Just Transition strategies were first forged by labour unions and environmental justice groups, particularly those rooted in low-income communities of colour exploited both by industrial pollution, racism and economic oppression. They saw the need to phase out the industries that were harming workers and irreversibly damaging the community's health and the planet.

Imagining just pathways for workers to transition to other decent jobs that restore their dignity was not an easy task. The term, therefore, defines a transition away from polluting industries and an international division of labour that reinforces destructive industries that threaten the lives of workers. This transition is in alliance with the communities that were victims of racism and the communities already marginalised and rendered disposable by the mainstream development disciplines.

Examples in Bangladesh are tanneries and leather industries, they are the worst water polluter with the waste of toxic chemicals. The tobacco industries are another vivid example that are destroying our fertile lands for food production, polluting the water and causing food insecurity. Tobacco industries are also a major health hazard for farmers, workers and most importantly children.

Exposing low-income communities to hazardous pollution and industrial practices and destroying the agroecological conditions that sustain their livelihood is a form of racism. Environmental Justice (EJ) movements took roots in such marginal contexts that are a sharp contrast to the mainstream environmental movement.

The Just Transition movement grew out of the realisation that the conventional environmental movement has failed to understand or address this injustice. The movement, therefore, emphasises bottom-up organising, centring the voices of those most impacted and shared community leadership.

The people of Bangladesh are 'victims' of the very foundation of industrial civilisation based on fossil fuel and subjected to industrial extractive expansionism of an exploitative global order. So, it is difficult to discuss and conceptualise a Just Transition strategy independently, as though Bangladesh is an island. Indeed Bangladesh exists merely as the assemblage of global relations, structure and power that functions to cause environmental and ecological destruction.

Bangladesh and her vulnerabilities

Bangladesh, a country that is exceptionally vulnerable to climate change, runs the world's second-largest apparel export industry and suffers from warming emissions besides savage exploitation of cheap labour to provide cheap apparel for western consumers.

The country has been facing extreme weather with increasingly frequent natural disasters like storms, cyclones, drought, erosion, landslides, flooding and salinisation. These disasters are already displacing large numbers of people.

It has been estimated that by 2050, one in every seven people in Bangladesh will be displaced by climate change. Up to 18 million people may have to move because of rising sea levels alone. This number is in addition to the displacement caused by development policies that were imposed by multilateral and bilateral global institutions.

The violent displacement of a population from an agrarian economy and livelihood options and forcing them to migrate to cities are inherent in the processes of capitalist transformation.

Industries, particularly garment industries require a cheap supply of labour so that cheap apparel could be produced for global consumers. Just Transition requires a systemic understanding not merely greening a few apparel industries in Bangladesh.

The massively destructive and extractive system is now becoming more visible after climate change and the Covid-19 pandemic. To make amends in the system, the Just Transition has to ensure justice for human beings and also seek a transition that could ensure livelihood and encourage ecological entrepreneurship in Bangladesh. It requires the government's commitment and the support of Bangladesh's development partners.

Since the 1970s, Bangladesh had to follow the donor-driven policies of modernising agriculture called the "Green Revolution" which was nothing but the use of chemicals (fertilisers-pesticides), extraction of groundwater for irrigation, mechanisation in post-harvesting, and use of High Yielding Variety (HYV), Hybrid and corporate seeds like GMOs.

The daughters and sons of the small-scale farmers left their villages since they had no prospects in the agricultural sector and therefore joined the RMG sector in large numbers. The supply of the labour was large enough for the RMG owners to exploit the labour with the cheapest possible wage; allowed by the government by not having any trade union, labour rights and other national policies.

The argument was that they were "export-oriented" and bringing in foreign exchange. As of 2021, this sector indeed has contributed 84% of the national exports worth over $25 billion. It is well documented that the ready-made garment industry is exploiting the labour force, mostly female, by giving them a very low wage, using them to work overtime yet not paying them enough salaries, taking off weekly holidays and denying maternity leaves.

What is less documented is that these factories are polluting the environment and causing emissions. The global fashion industry produces 4% of the world's planet-warming emissions, according to the much talked about McKinsey report in 2018. This includes the apparel sector.

Bangladesh, though a small player in the global scenario, contributes 0.45% of GHG emissions but has to make efforts towards the green transition. The global buyers and consumers do not want to lower their contribution to GHG emissions and thus pressures Bangladesh manufacturers to commit to cutting their GHG emissions.

Sustainability has become a core agenda among brands. 40 brands have committed to cutting GHG emissions and started using recycled fabrics.

The RMG industry is natural resource-intensive, particularly needing fresh water for washing, dyeing and finishing (WDF) textiles at different stages. It generates a large amount of waste, which pollutes the water, and soil around the factories. Several harmful and poisonous chemicals — including nitrous oxides, sulphur dioxides, carbon monoxide and chlorine dioxide are used in dyeing and other processing of fabrics like jeans.

Unfortunately, the global consumers cannot change their habits and instead put pressure on countries like Bangladesh to produce in an environment-friendly way.

It is also energy-intensive because hot water and steam have to be generated for the WDF activities. However, the principles of a just transition are rarely being applied. Only 140 factories are putting solar panels on their rooftops, seeking new ways to recycle water and chemicals, and using more energy-efficient machines.

The International Finance Corporation (IFC) in June told the Thomson Reuters Foundation it had helped 338 factories cut their greenhouse gas emissions by more than half a million tonnes a year. The Bangladesh Garments Manufacturers and Exporters Association (BGMEA) signed the United Nations Fashion Industry Charter for Climate Action in 2019 with the UNFCCC to reduce GHG emissions by 30% by 2030.

The standards to meet the requirement of certification from Leadership in Energy and Environmental Design (LEED) are much above the national requirements and are also expensive. But the Bangladeshi apparel industry is making efforts to get the green certificate to survive in the global competition.

These factories have reduced overall water usage by 30%. Groundwater extraction was decreased by 25.7%, while Process Water Consumption was reduced by 35.1%. Also, we reuse 32% of water treated at the ETP. But Green factories cost 15-20% more than traditional factories, and the entrepreneurs have to wait a while to reap the benefits, which will have to come from the buyers abroad - an uncertain prospect still.

Now comes the most difficult question of how the technologies required to meet the LEED certification and GHG reduction will affect the fate of the over 4 million RMG workers, the majority of whom are women.

The RMG sector minimises its production costs and increases profitability by paying lower wages while also depriving them of other labour benefits including payments for overtime work. The worker safety compliance requirement after the Rana Plaza incident required the owners to provide safe working conditions which increased costs and led to the closure of many small RMG factories and layoffs.

With the green economic transition, they need expensive energy-efficient technologies. There are some technological up-gradation in the knitwear factories which are causing labour displacements, particularly of the un/semi-skilled female workers.

It is now a big question whether the RMG sector and its contribution to the GDP have been helpful to the development of the country or whether Bangladesh has become a dumping ground for a labour exploitative and polluting industry that has taken centre stage in climate change discussions.