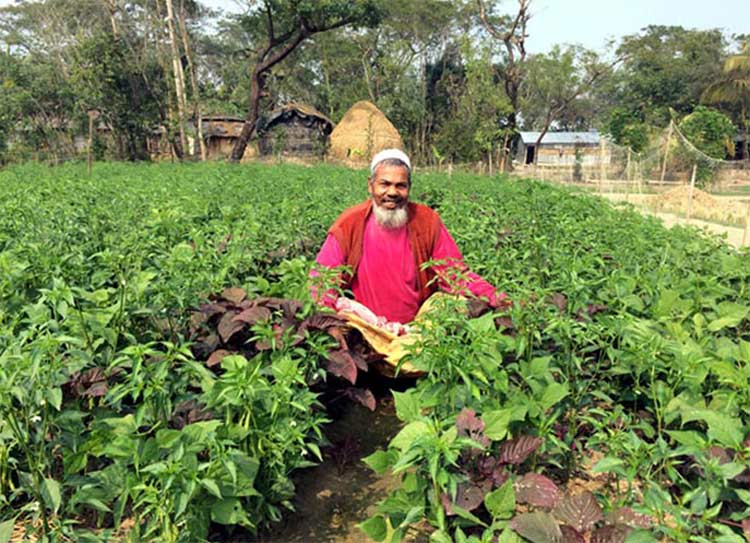 Land was water logged for long time. It took about two months for recession of water. “Under these circumstances, I was deeply concerned about my future plan for crop production. I shared my concern with the staff members of UBINIG for shortage of seeds.” – Waziullah said.

Waziullah also added, “ This is because the seed from market is not dependable. In most cases the seeds do not germinate. Moreover, the seeds from market are very costly.”

“The staff members of Daighors frequently visitd us in the village and indicate for seed support if needed. In last November, I received seeds of French bean, okra, red amaranth sweet gourd, from the Daighor run by UBINIG. I cultivated these crops in mixed culture”.

In spite of the damage of the flood, the soil fertility was enriched with siltation. There was better yield of crops including french bean, potato, chili, sweet gourd, string beans, etc. In addition to my own consumption of red amaranth, radish, coriander leaf, sweet gourd, I have also sold vegetables worth of BDT 8000 in the market - – Waziullah said. More crops are there in the field in bearing stages and being ready for market. I shall also maintain seed for next years’ cultivation. I shall share seed with neighbors and keep a portion of sands in Daighor.

“I was much benefitted with the seeds I received from UBINIG. Seed is the strength of the famer. The farmers become weak when seed is not in their hands. Seed is the most precious asset for us” – Waziullah said.