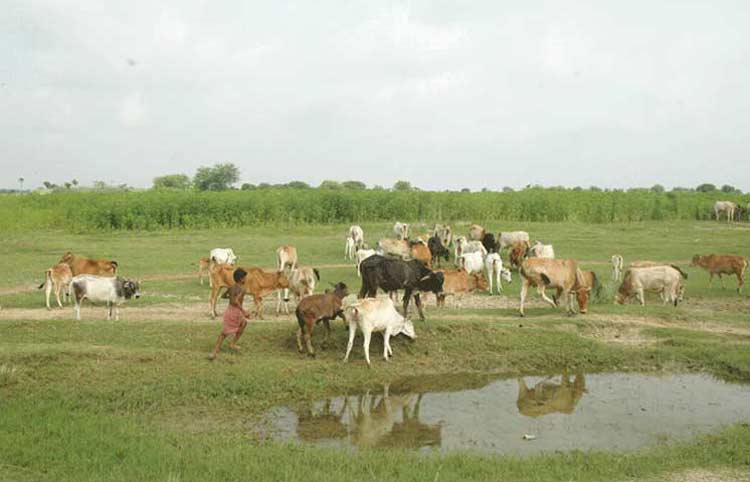 There are three district agro-ecological seasons, which are inter-related with growth and development of crops grown.

The pre-monsoon season (kharif - 1) runs from Baishakh to Srabon (Mid April to Mid August). High humidity, high temperature and evaporation characterize this period. There is a gradual progression of rainfall from pre-monsoon to monsoon. The late rabi crops are harvested early the season and kharif -1 crops are sown.

The major kharif-1 crops are jute, aus rice, sesame, and summer vegetables. Jute is a major priority crop. Previously white jute used to be grown exclusively. But there has been a shift in the recent past towards tossa jute. About 70% of the jute area is now covered by tossa jute. A local variety of white jute named 'Asmantara and Subujpat (CVL-1), a high yielding variety are mainly grown. The farmers maintain seeds of white jute varieties. But for tossa jute the farmers depend mainly on market supply of seeds.

Aus rice is grown in relatively low lands. The local varieties of aus are Kalabokri and two HYVs, BR - 14. and BR-26 are mainly grown.

The monsoon season (kharif II) extends from Sraban to Agrahayan (Mid July to Mid December). High humidity, frequent but intermittent rain and low solar radiation are the main characteristics. Major chunk of rainfall occurs in this period. Jute and aus rice sown during kharif-1 season are harvested and amon rice, the main Kharif II crop is transplanted. The main varieties of transplanted amon rice includes some of the indigenous varieties like maynagiri, nazirshail, dhapa, jhul, narkelbedi, rajpal, manikdigha, patjak, patishail. BR - 11 is the only common variety of HYV rice at Babupur.

The winter season (rabi/chaitali) extends from Poush to Chaitra (Mid December-Mid April). In this period there is negligible rainfall, humidity is low and high solar radiation. Amon rice planted in kharif season are harvested. The rabi crops including pulses, oil seeds, vegetables, and spices are sown. Boro rice is also transplanted in relatively low land on a limited area.

Livestock still plays an important role in the farming households. Cattle and goat are major heads. Almost every house holds have cattle and goat. But there is a declining trend of number of heads. The reasons for this decline were mainly due to shortage of feed, grazing ground and diseases.

Fowls, ducks and pigeons are almost common for every household. These scavenging birds are maintained at domestic level. The households tenderly care these birds. The main limiting factor is the disease prevalence, which have increased in the recent past.

Alongjani river, a branch of the Dhaleshwari passes by the east of Babupur village. In addition there are ponds and ditches close to each household. The plain land cropped with rice and jute also go under water in rainy season. The elderly farmers remembered their past memories in the village. Plenty of fishes were available in the river round the year. The situation has changed recently. This has happened due to bund (closure) of the entry point of the Dhaleshwari from the Jamuna. Due to this construction of embankment, the flow of the Alongjani has been drastically reduced. The Alongjani is in fact a branch of the Dhaleshwori. However, some indigenous fishes are still available. These include rui, katla, boal, tengra, puti, icha, bajaila, chanda, muchi, jeol, magur, taki and shoil.

The area is a part of the flood plain formed by the Jamuna and its tributaries like Dhaleshwari and Alongjani. The texture is silt loam. Rainfall exceeds evaporation. The soil is mildly alkaline. The area falls under AEZ-8, Young Brahmapatra Jamuna floodplain. It has moderate organic matter content.

Water is an important item for life. It is used in households, fisheries, agriculture and other purposes. Water acts as habitat for aquatic biotypes as well. Water resource of Babupur consists of three main sources including rainfall, river flow and under ground reserve.

Drinking water supply comes from ground water source. Every homestead has a hand tube-well for supply of drinking water round the year.

North portion of the village is close to a field of relatively lower elevation. Boro rice is grown there with irrigation from ground water by shallow tube-wells.

Uncultivated food includes items from both animal and plant sources. Self-sown plants of diverse species would have covered uncultivated spaces. Due to increased cropping intensity accompanied by changing cropping patterns the population of self sown plants has been reduced. Nevertheless some species have adapted to the changed situation and succeeded for eventual perpetuation. The following herbs are still available as weeds in the crop fields or in the wild: Telkuch, morogsok, khudemankol, Kalmi, helencha, henchi ,baita, gorma, dhekisak, and shapla.

The open water bodies in the village including river, road side canal, ditches, ponds and also the jute and rice fields that go under water in the rainy season abound number of fish species. The most common fishes include tengra, taki, sharputi, feka, boal, puti, darkina, chanda, khoilsha, etc.

More than 75% of the farmers at Babupur pursued Nayakrishi principles for crop production. In general they have been following sustainable practices of production and crop rotation. The most common cropping pattern was pulse in rabi, jute in Kharif - 1 and Amon paddy in Kharif-2. The soil nutrient status has been maintained at a balanced state through complementary effect of component crops in the pattern. In addition compost and cow-dung have been added in order to supplement the requirement for macro and micronutrient as well as organic matter.

Flood plain ecology has been the main guiding force for maintenance of cultivated and uncultivated plant population. The cultivated plants have evolved three distinct groups matching the day-length, temperature, hydrological cycles, soil moisture and other environmental components. There are three major growing seasons. These are rabi, kharif-I and kharif-II. In the rabi (winter) season oil seeds, pulses, spices, vegetables, potato, sweet potato, wheat, boro rice and minor cereals like millets, cheena, kaun are grown. Along with the cultivated plants, a good number of self-sown plant species emerge in the field. Commonly these are termed as weeds. But in fact, these are sources of uncultivated vegetables, cattle feed and medicinal herbs. These under-growths are still treated as common property of the community. The uncultivated vegetables are collected from the fields. Mainly the women and children irrespective of social and economic status of the family go for collection of vegetables from the field. The herbal healers and midwives collect the useful plants based on specific attributes and matching needs.

Water hyacinth is common in open water as a floating plant. Hydrilla, valisneria and water lily are found in the roadside ditches and other shallow water bodies. Green and blue-green algae play an important role in replenishing the soil fertility. A good number of fruit bearing plants including mango, jackfruit, blackberry, pomegranate, citrus, coconut, litchi, guava, banana, papaya, pineapple and melons are commonly grown. Most of these plants are grown in the homestead areas. The major timber plants include karai, mahogeni, and sisso. Bamboo and canes are also grown in the homestead areas.

Food sovereignty of each of the farming household is a priority issue for selection of crops. In addition to rice, the other major crops include pulse, oil seeds, potato, sweet potato, spices and vegetables. Jute and sugar cane are grown mainly as cash crops. Fruit bearing trees and other plants are grown mainly in the homestead areas. Plowing of land is done with country plow and bullocks. Fertility of soil is maintained at sustainable level through the use of complementary crop components in the pattern. Essential replacement of nutrients are made mainly through the amendment of cow dung, compost, ash and green manures.

Active participation of women in Agriculture

It was observed at Babupur that women played the key role in agriculture. They actively participate in most of the household level activities including post harvest processing of cereals, pulses, oil seeds, spices and vegetables. Maintenance of seed is priority work mainly done by women.