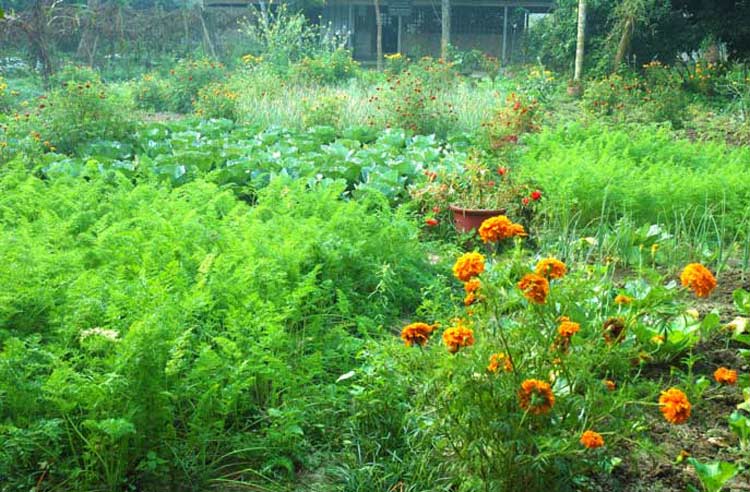 Crops such as coriander (Coriandrum sativum), fennel (Trigonella foenum), marigold flower (Tagetes patula) plants in the field can help repel pests. Enhancing the soil health through crop rotation and mixing is essential for both productivity and pest management. Legumes are combined with other crops. Healthy seed and healthy soil with diversity of crops do not become vulnerable to pest attacks. Healthy seed, of course, comes from farmers own collection of local varieties. Soil is kept healthy by not making it dependent on chemical fertilizers and pesticides. Healthy soil is soft and dark coloured. It is a living thing that contains billions of bacteria, fungi, and other microbes. Although many of these cannot be seen, Nayakrishi farmers are happy if they find earth worms and other visible micro-organisms in their piece of land. It is a good sign for the farmers.

Mixed cropping invites a number of partner crops that are not cultivated. According to different crop combinations several partner crops grow that are edible both for human and for livestock.

Farmers also earn better from a mixed crop field. It maximises the productivity from the same piece of land with harvesting of more than one crop. Farmers earnings are higher in a mixed crop field than the monocrop. The risks of crop losses and price fluctuations are also less because one crop can substitute the loss of the other.

Most important issue is vegetables from a mixed crop field tastes better. It allows other to collect uncultivated plants as food. It is a community binding cropping system. 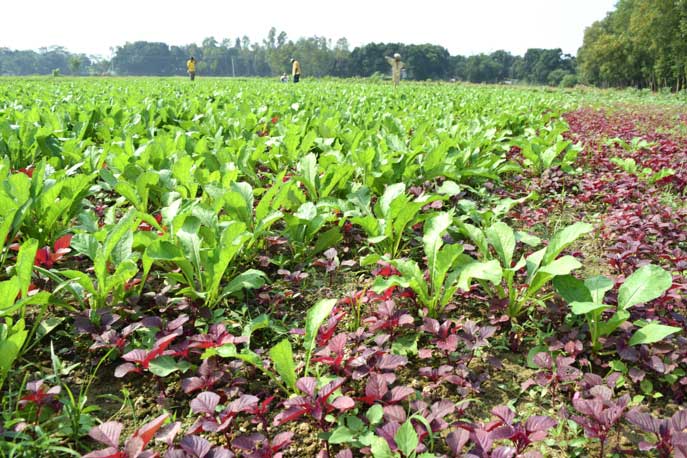 Red Amaranth is a popular spinach harvested mostly in mid December, while raddish intially harvested as spinach and later in January as vegetable. With this two cultivated crops, specific partner uncultivated plants grow in abundance, such as Helencha (Enhydra flactuans) and Dondokolosh (Leucus aspera). Farmers, especially women love these Shaks (spinach). The poorer women can also collect these shaks and can consume even though the land does not belong to them.

In a very short period of time (within one month and half) farmers can sell red amaranth and young raddish leaves as spinach. Later they have matured radish to use and sell as vegetable. In a small piece of 33 decimal land the estimated income from red amaranth is Tk.4000 and from radish leaves and roots is Tk.13,000 i.e. Tk 17,000 within a period of 45 days only. In addition the uncultivated plants are used as food and also as fodder for cows. 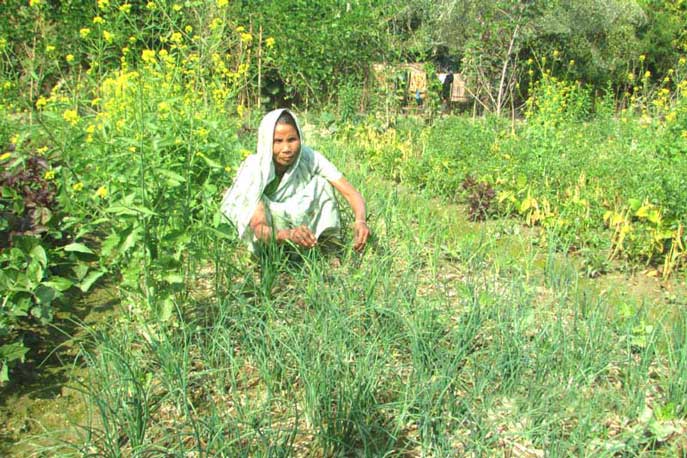 Several spice crops such as onion, garlic and Mustard as the main crop are mixed with amaranth as vegetable crop. Along with it the partner crops grown in the field are Bathua (Chenopodium album) and Hench ( i, both have market demand as well. Amaranth is harvested in the January-February as vegetable, mustard is harvested before onion and garlic, which are harvested in late March. The field is very productive with both cultivated and uncultivated crops. Bathua and Henchi shaks are very much in demand for human consumption as well as for livestock. These are sold in the market. In a piece of 33 decimal land, a farmer can earn Tk. 7,000 for Onion, Tk.4,000 for garlic, Tk.2,000 for Tk.2,000 and Tk.2,000 for mustard. The total income is Tk.16,200. Here Onion is the main crop but other crops are mixed and contribute to meeting the household needs as well as earn cash income. From selling of the Henchi and Bathua, the farmer earns an additional income of Tk,2000. 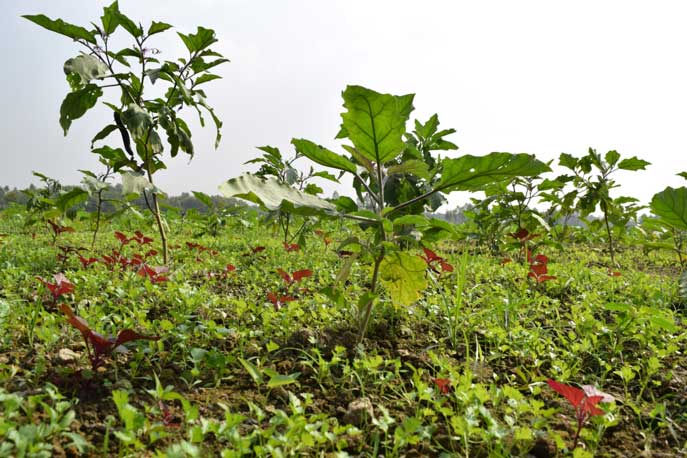 This is a mixing of crops with a longer span of time. Eggplant/auburgine is planted in December and harvested in February to April, red amaranth is harvested earlier and continues for long time. The coriander leaves are harvested in the early period and coriander is harvested later. The eggplant brings about Tk. 20,000 to 22,000 from 33 deci land, red amaranth Tk.3000, Coriander TK.4,000.

The uncultivated shaks are Katanotey (Amaranthus spinosus) and Bathua (Chenopodium album), which also brings about Tk.1200. 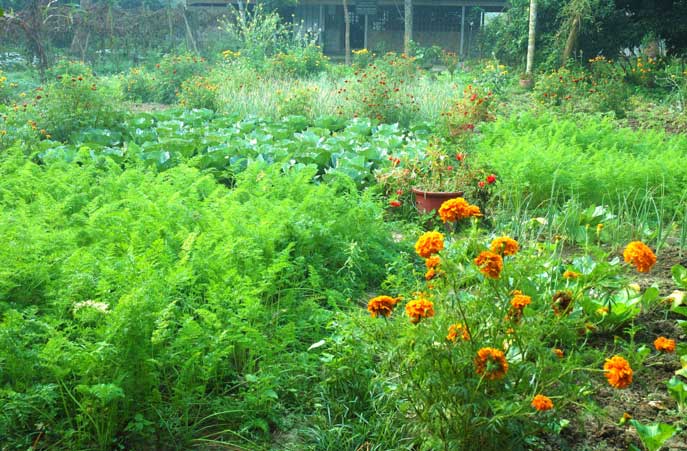 An intensive mixing of 6 crops including vegetables namely carrot, tomato and cabbage and spices namely onion and mustard (rai). In addition marigold flower is planted for pest management. Along with them three distinct uncultivated shaks are found, namely Dondokolosh (Leucus aspera), katanotey (Amaranthus spinosus) and bathua (Chenopodium album). The vegetables are mostly market driven crops consumed by middle class in the cities. Carrot, cabbage are harvested in December to January and can earn an income of Tk.20,000 to Tk.22,000 per 33 deci land. 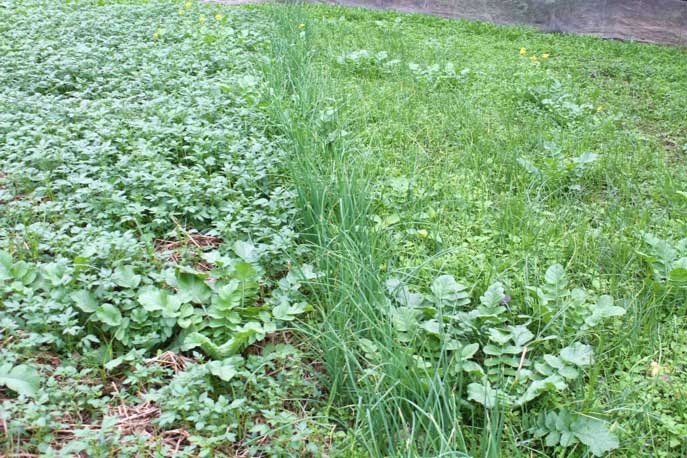 Mixed crop fields do not necessarily have all the crops mixed together. Within the field there can be seperate rows for certain crops while others can be mixed together. Onion is grown as a seperate column, while radish and potato are mixed together. Coriander is there in between. Henchi and Bathua are found as uncultivated shaks in abundance. From December radish is harvested brings about Tk.5000, potato is harvested in January-February, earns Tk.8000, onion in March Tk.3000 and coriander Tk.2000. The uncultivated shaks are harvested earlier. Altogether the income is Tk.18,000 without any risk.

Diverse Mixed crops as a design of crop fields 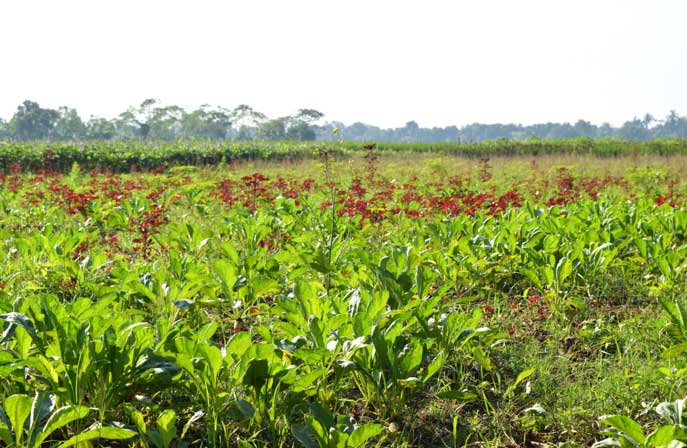 Mixed crop patterns are also part of the design of the cultivable land of the neighbouring fields in the village. Here the mixed crop field of raddish, red amaranth is surrounded by bean cultivation on a large scale. So it breaks the monotony of a single crop and saves from pest attack. Three different uncultivated shaks are found namely Dondokolosh, henchi and Bathua. The farmer from the small mixed crop field earns between Tk.15,000 to Tk.17,000 and Tk. 1500 from selling the uncultivated shaks. 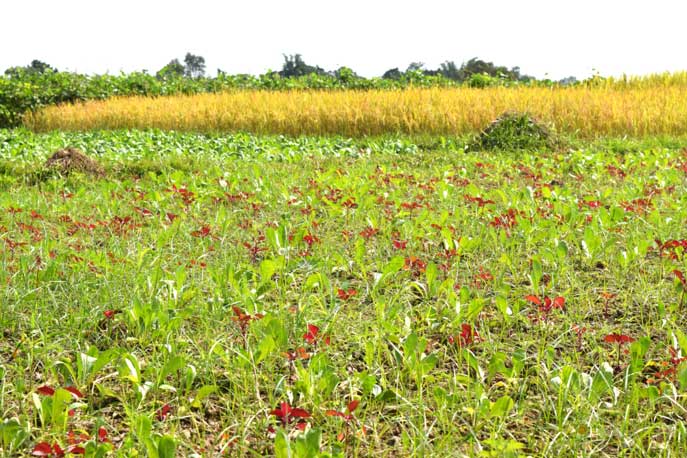 In the small piece of land there is radish and red amaranth, with BRRI dhan-29 rice and bean cultivation on the side fields. Uncultivated shaks are Kolmi (Ipomea aquatica) and henchi (Enhydra flactuans), both has market demand. None of these suffer from the monoculture cropping problems, because of supporting crops on the side. These crops support for risk management and can ensure an income to the farmer. From the small mixed crop field the farmer can earn Tk.17,000 in less than 2 months, with an additional income of Tk.2000 from Kolmi and Henchi. The RIce paddy is for subsistance needs and for selling. Bean is for selling.