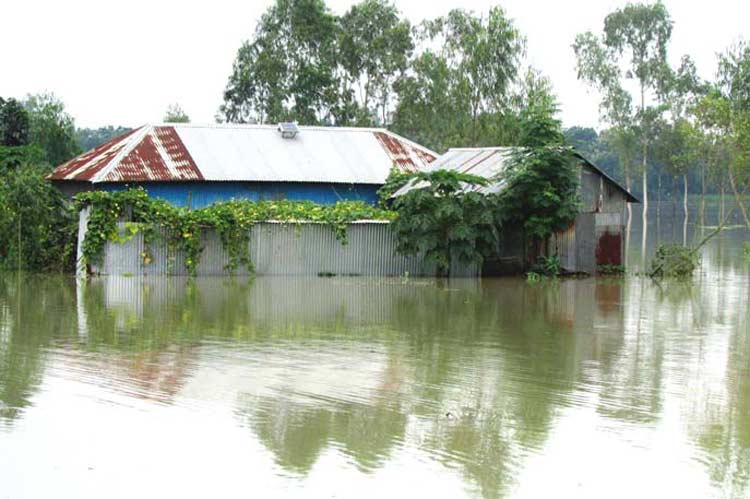 This year flood water started rising during late April and early May. Heavy current started hitting the river bank. Land erosion took a serious turn. The water level rose up and entered the Charland. The farmers are very busy during April-May harvesting their crops including sesame, millet, and groundnut. The river water rose up, the farmers harvest their crops and take home. The farmers grow relay inter-crop of Aman rice varieties including Baoilla Digha, Bokjhul, Digha, Hijaldigha, Kartikjhul, and Dhepa in the standing crops of millet and sesame. This year the flood water came earlier than before. Consequently, the farmers could not harvest groundnut although they had harvested sesame and millet. This is because groundnut was not at all mature stage when the flood water inundated the land.

The people at Sonatoni are marooned being cut off from Upazila and district headquarters and thus living a sub human condition due to short supply of daily essentials. Internal communication has been disrupted due to flood and heavy rain. The local market is flooded and the shops are closed. The farmers can not sell their produce and buy the essentials. The educational institutions like schools and madrassahs have been closed. Side by side with the scarcity of food, there is a shortage of cattle feed as well. Except for the leaves of sesbania plant, there is no other feed available for the cows and goats.

On top of sufferings due to flood, the people are traumatized from the attack of burglar and dacoits taking away the cows and goats in trawlers. In order to save from such attacks, the farmers have sheltered their cows and goats in a common high land and guarded day and night in groups. There are water and water every where. The people are living with serious anxiety for security.

The deep water rice varieties like Vaoailla Digha, Bokjhul, Digha, Hijaldigha, Kartikjhul, and Dhepa are still surviving struggling with rising flood water. Due to the heavy current of water rice in some plots have been lodged. The rice crops in these plots are prone to lose if the flooding is prolonged. The vegetable crops including okra, sponge gourd, ash gourd, basela, bitter gourd, pointed gourd and papaya grown in the homestead areas of the farmers have been damaged.

Loss due to river erosion:

Due to the heavy flow of water in the river, there has been heavy land erosion. Some dwelling houses along with the big trees have been wasted away by the river erosion, all on a sudden. There is a shortage of carpenters for repairing the damaged houses. Many owners of houses are busy doing the house repairing on their own. Others are trying their best to save the houses from the flow of flood water.

Six bamboo bindings (chatka) were constructed for checking river erosion at Bantiar, Sreepur, and Dhitpur. The chatka at Dhitpur point was damaged and washed away in the river due to the heavy flow of water in the river. Bantiar Bazar, Bantiar High School, and Primary School were saved by the two chatkas constructed at the Bantiar point. One side of Sreepur village was saved but the other side is under threat of erosion. Many farmers have, in the meantime, have shifted their houses elsewhere and others have dismantled and saved on the spot for re- construction after the flood.

Mother and Child Health Care center, the “Daighor” activities were suspended for last two months for the consecutive two times flood. Flood water has entered in the Chamtara and Bantiar (Baliakandi) daighors. Sreepur daighor was broken and saved elsewhere because the land was eroded by the river. It will again be constructed in a convenient place after the recession of the flood. The people in the Charland have been living a water logged life. It is very difficult for them to move from one house to another. They have no other alternative except boat and raft. Under these circumstances, it is difficult to run the activities of daighors. However, it was learned through discussion with the daimas that they had been maintaining links with the pregnant mothers and offered service by visiting their house.

There is a scarcity of drinking water because most the tube wells were submerged under flood water. There are patients almost in every house suffering from fever especially the children were affected most by fever. Older people in the houses were more helpless due to the flood.